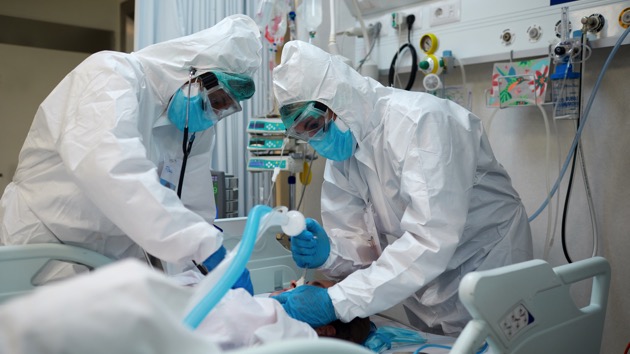 (AUSTIN, Texas) — As of Sunday, there were only six ICU beds open in Austin, 51 in San Antonio and 42 in Houston, critically low numbers for three of the nation’s largest cities, according to the latest state health department data.

In Austin, that number may be even lower due to a lag in ICU availability data reporting. “Yesterday we were down to two ICU beds,” Dr. Desmar Walkes, medical director and health authority of Austin-Travis County, said during a Tuesday press conference.

“What I am seeing during my shifts is just as bad, if not worse, than what I saw last year,” said Dr. Owais Durrani, an emergency medicine physician who works at several freestanding emergency departments and hospitals in East Texas. “Before COVID, sending patients home on oxygen was unheard of. We are now sending patients home on oxygen again due to hospital capacity issues.”

Critical access hospitals and freestanding emergency departments, like the ones Durrani works in, usually aren’t designed or staffed to keep patients for extended time periods. Instead, they rely on transferring patients to other facilities for critical care. But given the lack of available beds across the state, transferring is now nearly impossible, Durrani explained.

“We are having extreme difficulty transferring patients out,” he said. “I have personally transferred patients to other states due to not having any Texas beds.”

Even as cases and hospitalizations soar, Texas’ vaccination rate trails the national average. As of Monday, 53% of residents had received at least one dose, and 45% were fully vaccinated, according to the Centers for Disease Control and Prevention, compared with 59% of and 50%, respectively, of all Americans.

Durrani said everyone he’s personally admitted for COVID-19 treatment hasn’t been vaccinated, which can lead to worse outcomes even for those who have been.

He shared the story of a patient he treated with an acute medical issue that required surgery. ER physicians are trained to stabilize patients, not perform surgery. During non-pandemic times, that patient’s wait would have been a few hours. Instead, the patient sat in the emergency department for 16 hours because partner hospitals with surgeons were full.

“This patient of mine was vaccinated, not a COVID patient, but due to the pandemic brought on by the unvaccinated they received suboptimal care,” Durrani said.

Despite doctors and health officials across the state sounding the alarm, Gov. Greg Abbott has stood firm against public health mandates that helped drive down cases earlier in the pandemic.

“Going forward, in Texas, there will not be any government-imposed shutdowns or mask mandates,” Gov. Greg Abbott said last week during a speech. “Everyone already knows what to do.”

On Monday, Abbott addressed the hospital capacity shortage in a letter to the Texas Hospital Association.

“Among other strategies, hospitals could voluntarily postpone medical procedures for which delay will not result in loss of life or a deterioration in the patient’s condition,” the governor wrote. “Hospitals could also refer some COVID-19 patients to infusion sites, hereby freeing up hospital beds for more serious cases.”

Seeing hospitals fill up again is taxing on the health care workers, who are tired and fed up after battling COVID for a year and a half.

“This time it’s more anger than frustration,” Durrani said. “We went through this all of last year, and when we got the vaccine we saw a light at the end of the tunnel.”

“Schools are opening and the governor has banned school mask mandates,” he said. “Health care workers are tired, infuriated and simply sick of the politicization of science.”

“What has the medical community done wrong?” he asked. “We’re trying to promote health and prevent this from happening, and yet, it seems like there are people who want to take those tools away from us.”