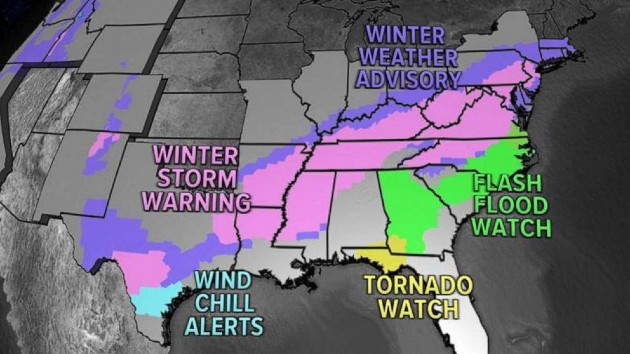 (NEW YORK) — The storm that left parts of the South under 15 inches of snow and a shield of ice this week is now moving into the East Coast.

The highest snowfall total this week was in Arkansas, where up to 15 inches of snow fell. Little Rock actually saw a record 11.8 inches on Wednesday. At the same time, half a foot of snow fell from Oklahoma to Tennessee, North Alabama and Mississippi.

But on Thursday morning, the storm is making its way into the East Coast, and could bring extreme weather from Florida to Massachusetts.

Winter weather alerts have stretched all the way to Texas, where a separate disturbance is bringing additional ice and snow Thursday morning.

Also on Thursday, heavy snow will be moving through the Northeast, from Washington, D.C., to Philadelphia, New York City and, eventually, Boston.

To the South, an icy mix of freezing rain and sleet is expected from Virginia to North Carolina.

There is also a flash flooding and tornado threat from Florida to North Carolina.

On Friday morning, snow will continue from Philadelphia to New York City and Boston, and an icy mix is expected from Washington, D.C., to Virginia and North Carolina.

While the cold weather will continue in some states, others will see warmer temperatures by the weekend.

A nice warm-up is expected in Houston Sunday, where temperatures are set to climb into the 60s.

Further north, from Kansas City to Chicago and Minneapolis, temperatures are expected to reach above freezing for the first time in weeks.