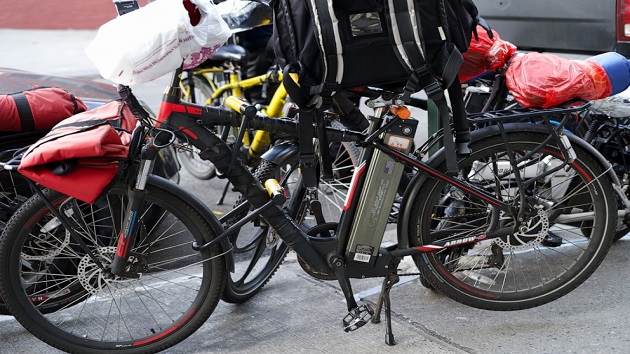 (NEW YORK) — The growing popularity of e-bikes in the United States in recent years has led to a rise in fires and other hazards, local and federal officials are warning.

At least 19 people died in the United States in 2022 because of fires or overheating incidents related to battery-powered products such as e-bikes, scooters and hoverboards, the U.S. Consumer Product Safety Commission said this week.

In New York City alone, fires caused by lithium-ion batteries powering these micro-mobility devices, also known as light electric vehicles (LEVs), have been responsible for at least 208 fires this year, resulting in 142 injuries and six deaths, a spokesperson for the New York Fire Department said.

Micro-mobility devices in 2022 caused four fires a week on average, based on data from the FDNY.

The Consumer Product Safety Commission (CPSC), in a letter last week, urged over 2,000 manufacturers, importers, distributors, and retailers of LEVs to sell products that use batteries built with standards set by Underwriters Laboratory, an industry safety organization, in order to reduce the risk of injuries and deaths.

Compliance with these standards should be demonstrated by certification from an accredited testing laboratory, the agency urged.

While many battery manufacturers like Bosch follow the standards, experts say the standards need to be industry-wide. The move to required UL standards in all these products would make them far safer overall, they say.

Some industry experts see the recent moves by the CPSC as evidence it lacks the necessary regulatory muscle to cause a change in the industry. This concern comes as more Americans are embracing LEVs, with many expected to purchase these around the holidays.

The CPSC has jurisdiction over these products. The U.S. Department of Transportation established in 2018 the Lithium Battery Working Safety Group which includes officials from CPSC, the U.S. Food and Drug Administration and the National Institute for Standard and Technology. The group advises Congress on additional ways to mitigate fire hazards from these batteries and ways to establish uniform regulations for these batteries.

When asked about why they were not seeking to make UL certification mandatory, instead of just encouraging companies to adopt those standards, a CPSC spokesperson said it is time consuming to adopt mandatory rules, making voluntary standards a more common course of action to get important safety information to industry and consumers as quickly as possible.

Fatiumata Dialo has been delivering food on his e-bike in New York for the last year. An immigrant from Guinea, he said his e-bike, for which he paid $1750, is the most expensive purchase he has made since arriving in the U.S.

Dialo cycles between several batteries for the bike over the course of the day. He charges his batteries overnight at his apartment, and he also pays a monthly fee to charge a battery during the day at a e-bike shop in Brooklyn.

Delivery workers pay about $40 a month to charge batteries in one of these e-bike shops, according to a worker in one store. One location in New York’s Chinatown visited by ABC News contained over 80 batteries charging at roughly the same time.

According to FDNY Deputy Commissioner Frank Dwyer, charging stations where dozens or even hundreds of batteries are being charged at the same time could pose fire hazards.

“That’s actually covered in the fire code. And we have our fire prevention people out there doing inspections on those properties if they’re not abiding by the proper fire code,” Dwyer said.

ABC News reached out to the fire departments for the 25 largest cities in the United States. New York City leads its metropolitan competitors with the highest number of fires caused by these devices, according to a review of city data. It’s also the leading city actively tracking the fires and working with government officials to understand and regulate the issue, according to interviews with fire officials.

Despite concerns about charging safety, Dialo said he was less concerned about the risk of fire than getting into an accident or getting robbed, he said. Other delivery workers ABC News spoke to seemed to agree with this prioritization of concerns.

However, recent reports of fires due to charging e-bike batteries have raised calls for action by many New Yorkers. A Nov. 5 fire at a high-rise building in midtown Manhattan that sent 38 people to the hospital was caused by a lithium-ion battery connected to a micro-mobility device, fire officials determined.

“It’s not just that there are fires, it’s that there could be a fire in my building where I sleep and my children’s sleep,” New York City Council Member Gale Brewer told ABC News.

The FDNY is attempting to learn more about how the fires are started. Often, the bikes and the batteries are too damaged by the fires to learn about the cause of the fire, type of bike and battery involved, and whether the cause could have been a manufacturing defect.

“So, it’s very hard to examine the actual battery that fails due to the explosive nature of these fires, and the damage that they’re subjected to after the fire occurs,” Dwyer noted.

Brewer sponsored recent legislation focused on e-bikes. The bills currently under consideration by the city council, which the FDNY has voiced support for, include measures to increase education about fire risks from batteries, ban the sale of second-hand batteries that have been reconditioned or manipulated and which are sold on the secondary market, require UL standards for bikes and improve reporting measures.

Some activists say the move is too late.

“They pass a law to legalize [e-bikes], but they never thought about the batteries? I mean, they’re talking about the batteries three years later,” said Hildalyn Colon Hernandez, the director of policy and strategic partnerships for New York City advocacy group Los Deliveristas Unidos.

The rise of LEVs

Light electric vehicles gained popularity as many Americans rethought common methods of transportation during the pandemic. A projected 1 million LEVs are expected to be sold in the U.S. in 2022, compared to the 288,000 sold in 2019, according to Ed Benjamin, chairman of the LEV Association.

But most consumers have gravitated to affordable models.

One of the priciest e-bikes listed in Consumer Reports retails at nearly $4,000, with the cheapest recommendation at $1,300. Some budget bikes retail on sites like Amazon for under $500.

According to Mike Fritz, a chief technology officer for micromobility industry consulting firm Human Powered Solutions, the economics of the $500 e-bike points towards concerns with the quality of the bike’s battery. Just to buy a high-quality battery costs around $750. A complete bike that costs less than that amount raises questions about the quality of the battery and other components.

Some manufacturers have cut corners to lower manufacturing costs, according to Jack Hao of battery manufacturer Phylion. This includes reusing parts of used battery packs from electric cars, which can increase the likelihood of a fire hazard, he said.

Combined with a weak regulatory environment in the U.S., consumers are sometimes left with poor options, said Percy Chien, the executive chairman of the Taiwan-based Fairly Bike Manufacturing Company.

A battery charges or releases energy by moving an electron-carrying ion between a node and a cathode, across a semipermeable barrier, Fritz said. If that barrier begins to fail and overheat because of a manufacturing defect or from an issue stemming from a faulty charger, an electrolyte liquid in the battery will begin to boil, trigger a pressure release valve, and push a gas out of the battery, which can then ignite when interacting with outside air.

An e-bike battery, which is made of dozens of small battery cells about the size of an AA battery, can cause a cascading chain reaction where one cell triggers other cells to fail, which can lead to a fire or an explosion in a worse-case scenario, he said.

A combination of cheap batteries, mismatched chargers, overuse, damage from weather, poor servicing, and other factors can combine to create deadly consequences, according to Fritz.

Keith Moravick, a vice president of engineering for Swiftmile, a manufacturer of charging systems for LEVs, noted factors that can cause battery deterioration include poor management system communicating between the battery and charger, a lack of weatherproofing for electric connectors, and the damage possibly done to a removable battery that is knocked around.

According to multiple industry experts, a move towards requiring UL standards for all batteries sold would reduce the risk of fires; however, the CPSC is only recommending such a standard at the moment.

Chris Nolte, founder of New York retailer Propel Electric Bikes, which only sells UL-certified Bosch batteries, said the issue has been mainly centralized in New York City in recent years, which is why the federal government has been slow to crackdown on the problem.

“I feel that the federal government likely will step in by 2024 and require a certification,” Nolte said.