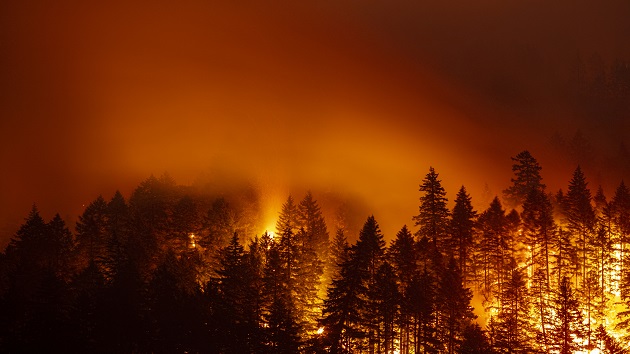 (SAN FRANCISCO) — More than 100 people were forced out of their homes overnight as California’s largest wildfire continues to spread at a rapid pace.

The Dixie Fire has now expanded to more than 190,000 acres — increasing by 20,000 acres in just 24 hours — prompting new mandatory evacuations near the Feather River Canyon as firefighters struggle to increase the 21% containment. Officials are still investigating the cause.

More than 8,300 people in Northern California are currently under evacuation orders, according to the California Governor’s Office of Emergency Services.

The Tamarack Fire near Gardnerville, Nevada, had burned through nearly 67,000 acres by Sunday morning, destroying at least 13 structures, and was just 27% contained. It sparked on July 4 in the Humboldt-Toiyabe National Forest.

In Oregon, the Bootleg Fire, currently the largest in the country and the third-largest in state history, is so hot it’s creating its own weather pattern. Pyrocumulus clouds, or fire-driven thunderstorm clouds, are created as large pockets of heat and smoke from the Bootleg Fire in southern Oregon rise and meet a relatively cool atmosphere.

The Medford National Weather Service has also confirmed that a tornado occurred on July 18 near the eastern side of the Bootleg Fire due to extreme fire behavior, dry fuels, and an unstable atmosphere.

The Bootleg Fire, approximately 11 miles northeast of the town of Sprague River in southern Oregon, had scorched through nearly 409,000 acres by Sunday morning and was 46% contained.

Nearly 90 large wildfires are burning in 13 states, with more than 2.5 million acres burned so far this year. More hot and dry conditions are expected in the West today, enhancing the fire risk for the already blaze-ridden region.

More than 3 million people in the West are under heat and fire alerts through Monday, and several states also have air quality alerts due to the wildfires.

Four states from Nevada to Montana will experience triple-digit temperatures on Sunday, while relative humidity is expected to remain at just 11%, with wind gusts up to 35 mph.