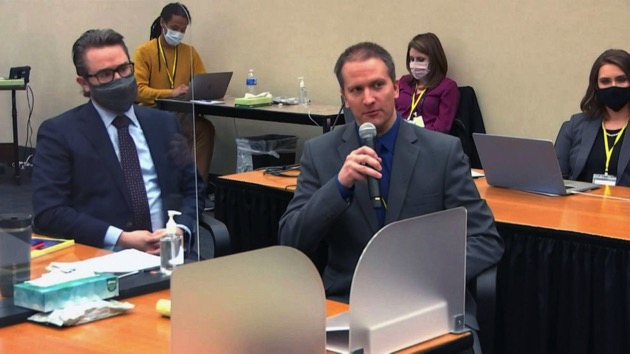 (MINNEAPOLIS) — Former Minneapolis police officer Derek Chauvin, who is accused of killing George Floyd, addressed the court on Thursday, telling the presiding judge that he has decided not to testify in his own defense.

“I will invoke my 5th Amendment privilege today,” Chauvin said, using a microphone in court.

Chauvin announced his decision after he and his defense attorney, Eric Nelson, had an open on-the-record discussion in court, in which Nelson emphasized, “This is your decision and your decision alone.”

Nelson said that he and Chauvin have had numerous conversations on whether or not he should take the witness stand, including a lengthy conversation Wednesday night.

Judge Peter Cahill questioned Chauvin about his decision, asking if he was pressured in any way in making it.

“No promises or threats, your honor,” Chauvin said.

Cahill said he will comply with Chauvin’s request to instruct the jury that they “should not draw any inference” on his guilt or innocence by exercising his right not to testify.

The development in the high-profile murder trial came as the defense prepared to rest its case Thursday.

Who is Monterey Park shooting suspect Huu Can Tran? Acquaintance says he ‘distrusted everyone’

Officers, paramedics plead not guilty in connection with death of Elijah McClain