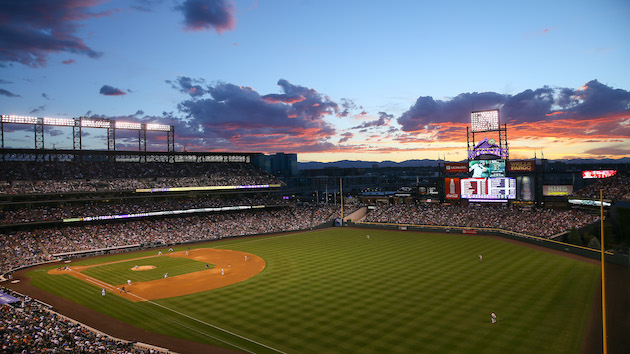 (DENVER) — Denver law enforcement officers were concerned they had encountered a mass shooting plot in the works when they learned one of four suspects arrested on gun and drug charges at a hotel near the venue of this week’s Major League Baseball All-Star Game had requested a room with a balcony, according to police reports.

Police were called to the Maven Hotel in downtown Denver on Friday after a hotel housekeeper entered the room of one of the suspects to clean it and noticed multiple firearms, according to probable cause statements filed in the incident and obtained by ABC News.

On Sunday, the FBI released a statement saying, “We have no reason to believe this incident was connected to terrorism or a threat directed at the All-Star Game.”

A preliminary assessment indicated the stash of guns seized at the hotel appears to be connected to a possible illegal transaction involving drugs and guns, according to an internal law enforcement memo obtained by ABC News.

Denver Police Chief Paul Pazen said at a news conference Sunday that the investigation is in its early stages and that “nothing has been ruled out.”

“We don’t know what we don’t know,” Pazen said. “That’s what the investigation is all about. We need to identify exactly, to the extent possible, why individuals were here in the first place, why in proximity to downtown. We don’t have those answers.”

When Denver police officers arrived at the hotel Friday night, staff directed them to a white Mercedes that reportedly belonged to one of the suspects and was parked in the hotel’s garage, according to the police affidavits. Officers went to investigate the vehicle, and when they peered through the windows they allegedly saw in “plain view” a rifle, bulletproof vest and a high-capacity ammunition magazine, the statements read.

Hotel employees told police that the person who owned the Mercedes had rented two rooms at the hotel, including the one where the housekeeper noticed the weapons, the documents state. The employees told police that the person who rented the rooms had specifically requested a room with a balcony that overlooked an alleyway and was supposed to check out on Friday but had extended his stay for several more days, according to the statements.

“It should be noted that this information was concerning to offices due to the location of the rifle, ballistic vest, duty belt and requesting a room with a balcony, coupled with the fact that the 2021 Major League Baseball All-Star Game events happening in the immediate area of the hotel,” the police statement read. “There is a propensity for mass casualty incidents in scenarios such as the above where many people are gathered together in a small area for a single event.”

The MLB All-Star Game is scheduled to be played Tuesday night at Coors Field, which is about a block from the Maven Hotel. Festivities around the game started over the weekend, and the event’s popular Home Run Derby is scheduled for Monday night.

Police obtained warrants to search the two rooms and in one of them found 12 guns and a large amount of suspected heroin and ecstasy pills, according to the statements.

Officers set up surveillance on the other room and detained a man, identified as Gabriel Rodriguez, 48, when he walked out, the police documents state. Rodriguez had a backpack with him that allegedly contained a loaded KelTec 9mm semiautomatic handgun with an obliterated serial number, an ammunition magazine, a large quantity of suspected methamphetamine and black tar heroin, according to the statements.

Police also seized about $1,120 cash they allegedly found on Rodriguez, according to the statements.

Rodriguez and two other suspects, Ricardo Rodriguez, 44, and Kanoelehua Serikawa, 43, appeared in court on Monday and were ordered to be held on bonds ranging from $50,000 to $75,000. The fourth suspect, Richard Platt, 42, made his first appearance in court on Sunday, and a judge ordered him to remain in jail in lieu of a $50,000 cash bond.

None of the suspects have entered a plea. They are being held on weapons charges and possession of a controlled substance with intent to distribute, according to Denver police.

They were all ordered to return to court on Monday. It’s unclear if any of them have retained attorneys or are waiting to be appointed public defenders.

During Monday’s court hearing, a prosecutor alleged that Ricardo Rodriguez was “the leader of the entire incident” and the one who rented both rooms at the Maven Hotel.

The Colorado Bureau of Investigation told ABC News that Platt, Gabriel Rodriguez and Ricardo Rodriguez are all convicted felons and that Platt has previously been convicted on weapons and drug charges.