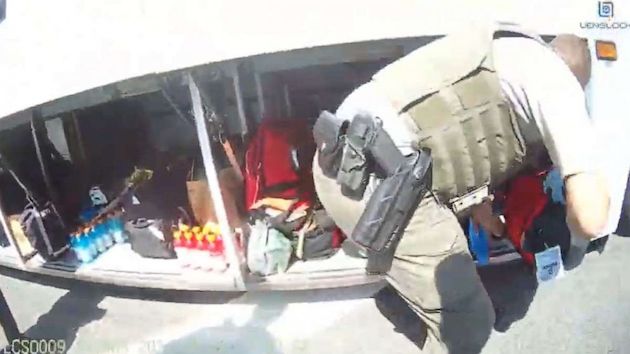 (NEW YORK) — Delaware officials are calling for an investigation into allegations of racial profiling after Georgia deputies conducted a drug search of a bus transporting female student-athletes at a historically Black university.

The Delaware State University Women’s Lacrosse Team was returning home from a game in Florida on April 20 when officers in Liberty County, Georgia, pulled the bus over for an alleged traffic violation.

Deputies then proceeded to conduct a drug search of the team’s bags in the luggage racks beneath the bus, including with the use of a K9, video and body-camera footage from the scene shows. Nothing illegal was found, authorities and school officials said.

The incident came to light after one of the team’s lacrosse players wrote about the search in the school’s newspaper last week with the headline, “Delaware State Women’s Lacrosse Team Felt Racially Profiled by Police in Georgia.”

The student-athlete also posted a video of the incident that was referenced by Delaware State University President Tony Allen in a message to the school community this week. In the video, a deputy informed the team that they were going to search their luggage.

Allen said videos such as this one “clearly show law enforcement members attempting to intimidate our student-athletes into confessing to possession of drugs and/or drug paraphernalia” and called the incident a “trying and humiliating process” for the team.

An incident occurred in Georgia when the Delaware State University Women’s Lacrosse Team was returning home from a game in Florida. Read a message from President Allen in which, again, he says, “We shall not be moved.” https://t.co/IihQ6yV3pt pic.twitter.com/RBC6jZF5C2

Sophomore lacrosse player Sydney Anderson, who was behind the school’s article and video, told ABC Philadelphia station WPVI there was “a clear indication of racism” in the search.

“If we got pulled over for a traffic violation, there’s no correlation between them checking our personal luggage and violation of traffic,” she told the station.

The team’s head coach, Pamella Jenkins, also charged that it was an incident of racial profiling.

“I definitely felt it by the accusatory tone of the police officer,” Jenkins told WPVI. “And while talking about narcotics, he went straight to marijuana.”

In response to the allegations, Liberty County Sheriff William Bowman said this week that the deputies followed protocol and that there was probable cause for the luggage search due to an alert from the K9.

“At the time, or even in the weeks following, we were not aware that this stop was received as racial profiling,” Bowman said. “Although I do not believe any racial profiling took place based on the information I currently have, I welcome feedback from our community on ways that our law enforcement practices can be improved while still maintaining the law.”

The sheriff’s office this week also released body-camera footage from the incident, which showed deputies interacting with the bus driver and student-athletes and going through their bags.

“Believe it or not, the majority of the drugs and large amounts of money, trafficking children, trafficking anything up and down these interstates, that’s what we look for,” the deputy can be heard telling the student-athletes on the bus. “We’re not saying that it’s even happening here. But however, this is how we start an investigation.”

Prior to conducting the search, the deputy can be heard while in his cruiser saying, “There’s a bunch of dang school girls on the bus. There’s probably some weed. Maybe.”

Bowman said the traffic stop is being reviewed to ensure there were no policy violations.

The university’s president said the school has contacted Delaware officials, including the governor and attorney general, and is “exploring options for recourse — legal and otherwise.”

“We do not intend to let this or any other incident like it pass idly by,” Allen said. “We are prepared to go wherever the evidence leads us. We have video. We have allies. Perhaps more significantly, we have the courage of our convictions.”

He further called for an investigation following the release of the body-camera footage and pushed back against statements from the sheriff’s office, including the claim that no personal items were searched. Bowman later clarified that while the front luggage area was checked, no players were searched.

“It has become abundantly more clear that this incident must be investigated by objective, external authorities,” Allen said in a statement Wednesday. “We continue to push forward toward that objective.”

Delaware Attorney General Kathleen Jennings said Wednesday that she has written to the U.S. Department of Justice about the incident “urging a full examination and I have every reason to believe one will occur.”