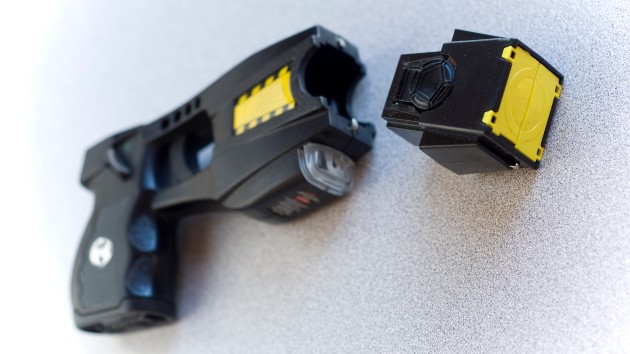 (NEW YORK) — Stun guns — less lethal use-of-force electroshock weapons that use up to 50,000 volts of electricity to temporarily incapacitate and immobilize targets — are widely used by police departments around the country.

Today, more than 18,000 police and military agencies across the nation use them and a National Institute of Justice report stated stun guns reduce suspect and officer injuries.

However, they have still drawn scrutiny — linked to hundreds of deaths in the U.S.

Critics say stun guns may also be at odds with police de-escalation policies, which the Department of Justice defines as “using the least amount of force necessary to resolve a situation.” The use of stun guns has come into focus once again in the case of the shooting of Daunte Wright, who was killed by an officer in Minnesota who may have mistaken her firearm for a stun gun during a traffic stop.

Geoffrey Alpert, a professor at the department of criminology and criminal justice at the University of South Carolina, said Tasers can be a good tool when used properly, but officers “go to their Tasers too often and too early.”

“The point of Taser was to avoid the use of deadly force. And so when you die from the Taser, it seems to be reaching the wrong conclusions,” he said.

Dearth of national data on stun gun use

It’s difficult to say if stun gun use is on the rise in the U.S. The FBI created the National Use of Force Data Collection in 2015 and began collecting data in 2019. But last year, just 40% of national law enforcement agencies across the nation sent in data.

Many individual departments, however, do have data on stun gun use.

The New York Police Department, for instance reported 1,420 electrical weapon incidents in 2020, according to department data, which made up 21% of all use of force incidents in the year. That’s a rise from 1,271 incidents reported in 2019 and a major jump from 501 incidents in 2016.

In 2020, electrical weapons led to the highest rate of physical injury compared to incidents involving firearms or physical force. NYPD data shows 626 people, or 55.3% of targets, suffered injury from electrical instruments, according to the database.

Stun guns have become more prolific in the NYPD. Until 2015, their use was limited to NYPD supervisors and members of highly trained units, but they are now available to “any uniformed member of service who is qualified,” the NYPD told ABC News. Today, there are approximately 7,000 conductive electrical weapons deployed throughout the department, a major jump from the 1,710 stun guns used in 2016, per the New York Times.

Declining firearm incidents in the department and increased stun gun use may be in response to a 2015 report by the city’s Department of Investigation that found the NYPD had “insufficient training on de-escalation tactics necessary to prevent excessive force in the first instance.”

In Chicago, there were 1,885 stun gun incidents over the past six years, including 149 in 2020 alone, per the Chicago Police Department Use of Force dashboard.

Stun gun use has declined over the past years in the CPD — coinciding with sweeping changes made to its use of force policy in 2017 that emphasized de-escalation and the sanctity of life. Under that policy, stun guns should only be used when necessary against active resisters and assailants.

In 2020, the Atlanta Police Department reported 136 stun gun incidents, which accounted for 36% of all police force incidents, up 27% from the year prior.

“The introduction of the Conducted Electronic Weapon (CEW – Taser) and its usage has minimized the amount of physical force and injury causation to both officers and arrestees. Taser dependence amongst officers has grown continuously since the introduction of the device in 2013,” the department said in it’s 2020 Use of Force report.

Why stun guns are used

It states officers should keep electronic control weapons (ECWs) on their weak-side holster, be trained to perform a cross-draw (where the dominant hand reaches across the body) to prevent accidentally drawing a sidearm, undergo scenario-based training, be re-certified annually, use stun guns for one standard cycle (which lasts five seconds), and give a warning before firing.

It further advises that ECWs should not be used against pregnant women, the elderly, young children and visibly frail people. They should only be used against subjects exhibiting active aggression, not on a “passive” or fleeing subject.

The 2016 4th Circuit decision Armstrong v. Pinehurst set another precedent. It banned stun gun use if there is no immediate danger to officers or others and use on a fleeing subject. The court’s decision became binding federal law in North Carolina, South Carolina, Maryland, Virginia and West Virginia, according to a 2019 National Institute of Justice report.

In the current case involving Daunte Wright — pulled over for an expired registration tag and a warrant — the situation escalated.

When officers tried to take him into custody he got back into the car, police said. In body camera footage of the incident, veteran officer Kim Potter is heard saying, “I’ll Tase you! I’ll Tase you!” before pulling a Glock 9mm handgun with her right hand and shooting him in the chest. Afterwards she said, “S—, I just shot him!” according to prosecutors.

Experts say it’s too soon to tell if Potter, who has offered her resignation, was warranted in using a stun gun in this case.

Under the Brooklyn Center Police Department’s policy, the stun gun is intended to control a violent or potentially violent individual, while minimizing the risk of serious injury.”

According to the policy, officers have to be trained and must position stun guns “in a reaction-side holster on the side opposite the duty weapon” and “mere flight from a pursuing officer, without other known circumstances or factors, is not good cause for the use of the TASER device.”

“One of the things that did stick out to me was she shot him in the chest, officers are not taught to deploy [stun guns] to the chest. You run the risk of cardiac effects,” he said told ABC News.

Leonesio noted that in body camera footage, Potter appeared to be closer than the guideline distance of 7 to 15 feet to deploy a stun gun. He also said that weapon confusion situations usually unfold in very high-stress incidents.

“Just my initial impression is you have an officer who’s on the job for 26 years, that shouldn’t have been a real big deal,” he said.

According to Leonesio, when it comes to stun guns in the U.S. there is “a lack of training,” an assertion Alpert made as well.

“The problem is not with the Taser as much as it is with the operator. I’ve never seen anyone die from a single five second ride from a Taser. People die from these multiple rounds, they die from being shot on a high surface and they fall off a roof or they fall,” Alpert said.

Approximately 45 people a year die from stun guns on average in the U.S., according to Amnesty International.

Amnesty International Researcher Justin Mazzola told ABC News there is no national guidance on how to use stun guns appropriately and law enforcement agencies are responsible for their own training. He says this leaves stun guns “inherently prone to abuse.”

“I don’t think people truly understand that people can die following the use of a Taser, whether from the Taser itself or if they have underlying heart conditions or are in a mental health crisis or being restrained in other ways,” Mazzola said.

“Without national standards and strict guidelines on their use, what you end up getting is law enforcement agencies either developing their own policies or copying other bad policies,” he added.