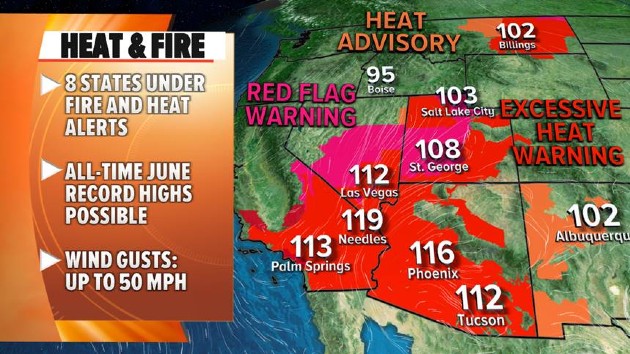 (NEW YORK) — A dangerous heat wave is spreading across the West from California to Utah.

Temperatures are forecast to reach 105 degrees in Salt Lake City, 118 degrees in Phoenix and a scorching 123 degrees in Needles, California by Tuesday.

If Salt Lake City does reach 105 degrees, it will tie the all-time record for June.

Los Angeles is also impacted. Burbank, California, is set to climb to 103 degrees on Tuesday.

This comes as dry, hot and windy conditions are helping to ignite wildfires across the West.

There are at least 28 wildfires burning in the region, mostly in Utah and New Mexico.

In Riverside County, California, where the Flats Fire ignited on Sunday, burning 400 acres, some residents are under mandatory evacuation orders, according to ABC Los Angeles station KABC-TV.

The Pack Creek Fire in Utah, which started by an abandoned campfire and has reached over 5,000 acres, has also forced evacuations, reported ABC Salt Lake City affiliate KTVX-TV.

Meanwhile, in the Northeast, severe weather may hit the Interstate 95 corridor from Washington, D.C., to New York City on Monday. Those areas could see damaging winds, hail and possibly isolated tornadoes.