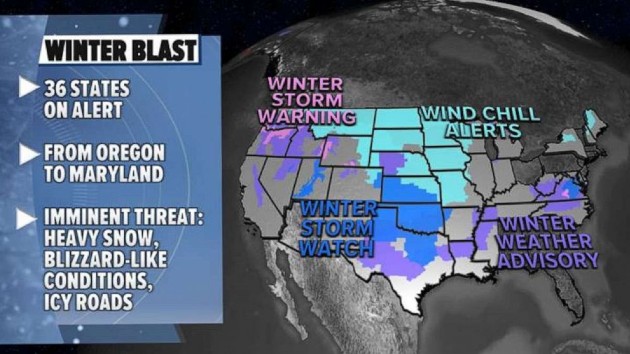 (NEW YORK) — Multiple storms will move across the U.S. this weekend into next week bringing snow and ice from coast to coast.

Thursday’s storm hit the South with freezing rain and sleet and turned roads dangerous from Texas to Virginia.

In Fort Worth, Texas, at least six people died and 65 others were injured in a massive freeway pileup that involved over 100 vehicles. Fort Worth police said the icy roads likely contributed to the crash.

Some areas in central and western Texas got up to 1 inch of ice accretion. There were also widespread reports of half an inch of ice accumulation in Arizona, Tennessee and Kentucky.

Now, that storm is moving through North Carolina and Virginia with snow and ice. Raleigh is under a winter weather advisory for freezing rain and sleet.

On Friday morning, 36 states, from Oregon to Maryland, are under some sort of snow, ice or cold alert.

A winter storm warning is set for Portland, Oregon, and a winter storm watch is set for Seattle, which is expected to see heavy snow and gusty winds. There is even a blizzard warning for the Columbia River Gorge.

Part of that western storm is moving quickly east, and will bring an icy mix to the Mid-Atlantic by Saturday evening into Sunday, where a winter storm watch has been posted for Washington, D.C.

By Sunday night into Monday, a third storm will move out of the West and slide south into Texas and Oklahoma.

A winter storm watch has been issued for Dallas, Oklahoma City and nearly all the way down to the Mexican border. Heavy snow and gusty winds are expected there.

This third storm is then expected to move to the East Coast. It will bring an icy mix to the I-95 corridor and heavy snow inland.

With all these storms coming up over the next five to seven days, almost all lower 48 states will see some sort of wintry precipitation accumulation, even as far south as San Antonio, Texas, and Jackson, Mississippi.

Apart from that, dangerous cold air will pour into the South, reaching Texas by Sunday into Monday.

Wind chills could reach below-zero temperatures even as far south as Dallas and Austin, Texas.

The North will also see some cold. Winds chills could dip as low as -60 degrees and frost bite could set in on exposed skin in as little as five minutes.