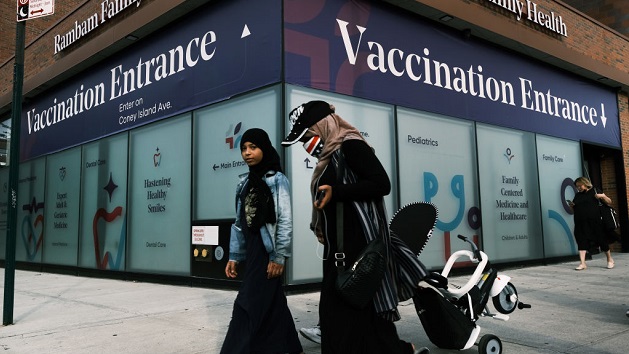 “The delta variant is highly contagious and circulating across the US,” he added. “Get vaccinated!”

Friday just in: +600K doses reported administered over yesterday’s total, incl. 363K newly vaccinated. In the past 7 days, 2.15M reported newly vaccinated, vs. 1.88M the 7 days prior (+14%). The delta variant is highly contagious and circulating across the US. Get vaccinated!

The delta variant now makes up over 80% of cases, Centers for Disease Control and Prevention Director Dr. Rochelle Walensky said Tuesday, up from 50% at the beginning of July.

It’s unclear at the moment whether the increase in vaccinations is a blip or a trend. An ABC News analysis of CDC data shows that, as of Thursday, the number of COVID-19 vaccinations had plateaued at about 530,000 total shots administered per day. Over the last week, on average, 297,202 people initiated vaccination per day — 9.6% higher than the previous seven days.

On average, 236,791 adults initiated vaccination each day in the last seven days — 7.4% higher than the previous seven days, the analysis found. Among 12- to 17-year-olds, that number rose nearly 20%.

The five states that currently have the highest COVID-19 case rates are seeing their vaccination numbers increase, according to the White House. Arkansas, Florida, Louisiana, Missouri and Nevada are seeing a higher rate of people getting their first shots compared to the national average, Jeff Zients, the White House coordinator on COVID-19, told reporters Thursday.

“This is a very positive trend,” he added.

Visits to the website vaccines.gov from users in Alabama — the least-vaccinated state — have gone up three times in the last two weeks, according to epidemiologist and ABC News contributor Dr. John Brownstein. Meanwhile, people in Louisiana and Missouri have doubled visits to the site, he found, suggesting people there are seeking information on where to get a shot.

On Friday, Alabama Gov. Kay Ivey called on people to get vaccinated, as the daily average of new COVID-19 cases has tripled over the last two weeks in the state.

“Let’s get it done, and we know what it takes to get it done — get a shot in your arm,” she said during a press briefing. “I’ve done it, it’s safe, it’s effective, data proves that it works, it doesn’t cost anything, it saves lives.”

Just under 34% of the state’s population is fully vaccinated, according to CDC data.

“Louisiana is undeniably in a fourth surge of COVID,” the governor said during a press briefing Friday afternoon, as the state reported 3,127 new cases. The state’s average daily cases per 100,000 residents has increased 208% over the past 14 days.

“Louisiana now has the highest growth rate in cases per capita in the United States of America. I want to let that sink in,” Bel Edwards said, attributing that to widespread transmission of the delta variant and the “very low percentage of people who have been vaccinated.”

About 48% of residents ages 12 and up have gotten at least one dose of the vaccine, according to the governor.

“That number is far below where we need to be to have the protection that we need in order to slow the spread and move toward ending the pandemic,” he said.

One encouraging sign, and one the governor noted he hopes continues, is that vaccinations have been on the rise over the past two weeks, state officials said, going from an average of 2,000 vaccine initiations per day to about 5,000 per day.

“This surge is on us,” Bel Edwards said. “How bad it gets, how long it stays bad, how many people ultimately die — on us.”