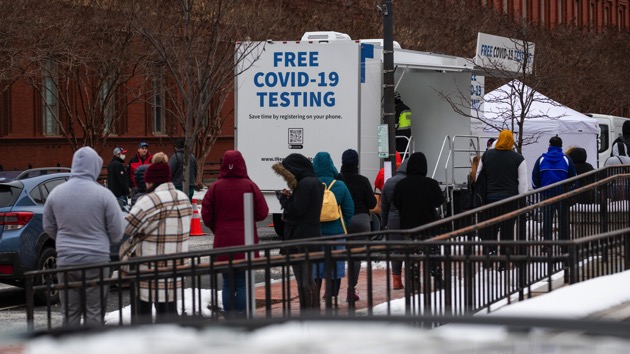 (NEW YORK) — As the COVID-19 pandemic has swept the globe, more than 5.5 million people have died from the disease worldwide, including over 853,000 Americans, according to real-time data compiled by Johns Hopkins University’s Center for Systems Science and Engineering.

About 63% of the population in the United States is fully vaccinated against COVID-19, according to data from the Centers for Disease Control and Prevention.

More than 18 million new cases were reported in the week ending Jan. 16, up from about 15 million in the previous week, according to the United Nation’s health agency’s weekly epidemiological update.

Last week’s increase marked a decline from the 55% increase reported the previous week, the agency said.

“Nonetheless, a combination of the increased and rapid spread of the Omicron variant, increased population movements and social mixing during and after the end of year holiday period and challenges with ongoing adherence to public health and social measures (PHSM) are expected to lead to increased number of cases, hospitalizations and deaths in the coming weeks,” Tuesday’s report said.

About 45,000 new deaths were reported worldwide last week, up from about 43,000 the previous week, the agency said.

The administration will start shipping out the masks, which are coming from the Strategic National Stockpile, at the end of this week. Masks will start to be available at pharmacies and community health centers by late next week, with the program “fully up and running” by early February, the official said.

President Joe Biden had announced last week that the administration would be launching a program to provide high-quality masks to Americans for free, but did not provide details.

The announcement comes on the heels of updated guidance from the Centers for Disease Control and Prevention that stated that loosely woven cloth masks provide the least amount of protection against COVID-19, and that Americans in some cases might want to opt for higher quality masks like KN95 and N95 respirators.

Three-quarters of all Americans — nearly 250 million people — have now received at least one COVID-19 vaccine dose, according to updated data from the Centers for Disease Control and Prevention.

On average, around 296,000 Americans daily are receiving their first shot, down by about 35% since mid-December, federal data shows.

Some 62.7 million eligible Americans — those ages 5 and up — are unvaccinated.

Around 981,000 children in the United States tested positive for COVID-19 last week, according to a new report from the American Academy of Pediatrics and the Children’s Hospital Association.

This “dramatic” uptick is a nearly 70% increase over the 580,000 added cases reported the week ending Jan. 6, and a tripling of case counts from the two weeks prior, the organizations said.

With nearly 9.5 million children having tested positive for the virus since the onset of the pandemic, that means 10% of those cases were in the past week alone.

In recent weeks, there has been a significant increase in demand for coronavirus tests as more Americans are exposed to the virus. Many students have also been tested as they return to school, which can lead to an increase in these numbers.

The organizations said there is an “urgent” need to collect more age-specific data to assess the severity of illness related to new variants as well as potential longer-term effects, and noted in their report that a small proportion of cases have resulted in hospitalization and death.

The rising number of pediatric cases has renewed the push for vaccination. Nearly 19% of children ages 5 to 11 and about 55% of those ages 12 to 17 are fully vaccinated, according to federal data.