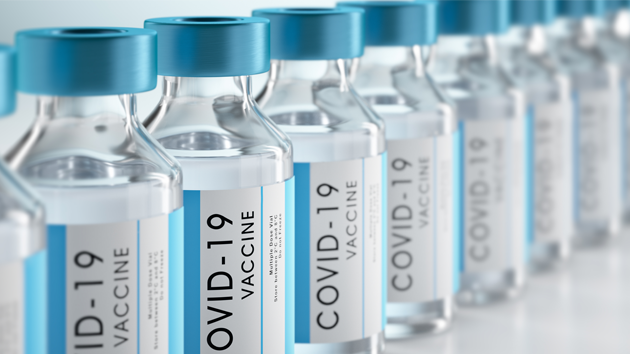 (WASHINGTON) — The United States is facing a COVID-19 surge this summer as the more contagious delta variant spreads. More than 639,000 Americans have died from COVID-19 while over 4.5 million people have died from the disease worldwide, according to real-time data compiled by the Center for Systems Science and Engineering at Johns Hopkins University.

Just 61.2% of Americans ages 12 and up are fully vaccinated against COVID-19, according to data from the Centers for Disease Control and Prevention.

The governor said he toured a nearly-full ICU in Boise where everyone was unvaccinated.

“What I saw was heartbreaking,” Little said at a news conference. “I was told the average age of the patients was 43. All of them were struggling to breathe and most were only breathing with the help of a machine. Doctors, nurses and associated medical staff are exhausted.”

The governor said up to 370 additional staff, including up to 150 National Guardsmen, will be deployed to help short-staffed hospitals manage the surge.

“Googlers will only be expected to return at that time as it’s deemed safe to do so in their country, and will be given 30 days notice to prepare before the voluntary WFH period ends,” the company said.

Google is also allowing employees to temporarily work from a location other than their main officer for up to four weeks per year.

Masks to be required in Pennsylvania schools

“My office has received an outpouring of messages from parents asking us to protect children by requiring masks in schools,” Wolf tweeted. “I preferred for local school boards to make this decision. But an aggressive nationwide campaign is pressuring school districts to adopt unsafe policies.”

Mississippi has the country’s highest COVID-19 case rate, followed by Florida, Kentucky and Louisiana, according to federal data.

With more than 101,000 Americans now hospitalized with COVID-19, the U.S. is steadily approaching its hospitalization peak from early January, when more than 125,000 patients were hospitalized at one time, according to federal data.

Among those charged is a woman who allegedly sold 250 fake cards on Instagram, believed to be among the first alleged seller of phony vaccine cards charged in
the country.

Manhattan District Attorney Cy Vance said in a statement, “We need companies like Facebook to take action to prevent the fraud happening on their platforms.”

“Making, selling, and purchasing forged vaccination cards are serious crimes with serious public safety consequences. This investigation is ongoing,” Vance continued. “If you are aware of anyone selling fake vaccination cards, please call my Office’s Financial Frauds Bureau at .”

Weekly testing will be required for unvaccinated NY school staff

“I think that’s a compromise,” she said.

Hochul is also working to establish vaccine requirements for all staff at state-regulated facilities and congregate settings. New York officials announced last week that all health care facility staff must be vaccinated.

Fully vaccinated immunocompromised individuals still produce immunity, but at reduced levels compared to healthy individuals, according to a study released Monday by the American College of Physicians.

Researchers at the Washington University School of Medicine compared antibody responses between 133 immunosuppressed and 53 healthy participants between Dec. 10, 2020, and March 20. The study looked at mRNA COVID-19 vaccines produced by Pfizer and Moderna.

Researchers said the study emphasizes the need for booster shots among immunocompromised patients.

Doctors from Lee Health Facilities, a health care system in Florida that consists of four acute care hospitals and two specialty hospitals, are begging residents to get vaccinated as hospital beds remain unavailable.

Patients are currently waiting for beds in hallways and closets, doctors announced at a news conference Monday.

Lee Memorial Hospital in Fort Myers, Florida, admitted 92 COVID-19 patients on Sunday alone, and eight to 12 patients in the health system are dying every day, Dr. Larry Antonucci, CEO of Lee Health, told reporters, saying the deaths are “not necessary.”

“Our COVID rate in this county is three times what we’re seeing throughout the rest of the United States,” Antonucci said.

As COVID-19 infections steadily increase across the country, the U.S. continues to see a concerning surge in pediatric cases just as children head back to the classroom for a new school year.

Just under 204,000 new child COVID-19 cases were reported last week, marking the second-highest week on record, according to a newly released weekly report that compiles state-by-state data on COVID-19 cases among children from the American Academy of Pediatrics (AAP) and the Children’s Hospital Association (CHA).

After declining throughout the early summer, new child cases have increased “exponentially,” the organizations said, with an over five-fold increase the past month, rising from about 38,000 cases the week ending July 22 — a 427% increase in the weekly rate.

Since the onset of the pandemic, nearly 4.8 million children have tested positive for COVID-19. Last week, children represented 22.4% of all reported COVID-19 cases.

However, the AAP and CHA warned that there is an urgent need to collect more data on the long-term consequences of the pandemic on children, “including ways the virus may harm the long-term physical health of infected children, as well as its emotional and mental health effects.”

Authorities are warning of a fresh and specific increase in counterfeit COVID-19 vaccination cards on the online market, according to a new law enforcement bulletin obtained by ABC News.

These blank cards can be downloaded, printed and filled out in order to gain entry where proof of vaccination is required, and to “satisfy employer vaccine mandates,” according to the notice.

This latest warning comes just as ABC News has reported exclusively that federal health officials are seeing an alarming rise in the demand for these fraudulent cards, which cyber experts and federal officials are are concerned is a burgeoning and rapidly evolving market.

The illicit niche industry for forged cards is hitting its stride just as new vaccine requirements are rapidly being implemented at the federal, state and local levels and in both the public and private sectors — requiring proof of inoculation in order to work at a hospital, teach or attend school, work out at the gym, or eat inside a restaurant.

Despite new policies and FDA full approval of Pfizer’s COVID-19 vaccine, some hesitant Americans still refuse to be vaccinated.

For enterprising fraudsters, the fresh demand presents a ripe opportunity.

In this latest bulletin, social posts and law enforcement source information indicates that criminal actors in the Philadelphia area are “profiting from the production of these cards” and “selling the counterfeit cards through online and in-person sales.”

“The use of fraudulent cards may have a significant impact on public health, especially in compact and vulnerable communities like academic institutions and healthcare facilities,” the bulletin warns, reminding those who profit from or use these fake cards may face prison time or hefty fines.

The U.S. Department of Education has launched a civil rights investigation into five states that have barred indoor making mandates, alleging that the governors are creating an unsafe learning environment for students with disabilities at heightened risk of severe illness from COVID-19.

The Centers for Disease Control and Prevention has found that schools are generally safe if students and staff universally wear masks. School districts that struggled with COVID-19 outbreaks this year – often sending thousands of kids home – typically did not require masks.

The investigation’s focus is on Iowa, Oklahoma, South Carolina, Tennessee, and Utah. The Education Department says it is not including Florida, Texas, Arkansas and Arizona at this time “because those states’ bans on universal indoor masking are not currently being enforced as a result of court orders or other state actions,” federal documents state.

The benefits of getting a COVID-19 vaccine outweigh the risk of getting myocarditis from the vaccine, CDC experts say, adding that it’s even more apparent now that cases are spiking among young people.

The risk of getting myocarditis – inflammation from the heart muscle – from the virus is much higher than getting it from a vaccine, scientists said at a CDC advisory panel Monday, pointing to new data.

The CDC estimates that the risk of myocarditis for the highest risk group — young males age 16 to 17 — is about 73 cases per million doses of the Pfizer vaccine.

The public health agency also estimates that 56,700 cases of COVID-19 would be prevented in that same age group for every million vaccines.

In addition, the risk of myocarditis after actually getting COVID-19 is six to 34 times higher than it is from getting a vaccine.

More than half of US nearing ICU capacity

The panel also found that the risks of contracting COVID-19 are still much higher for the unvaccinated.

The COVID-19 vaccines’ ability to keep people out of the hospital appears to be dropping slightly, particularly for those 75 and older, the Centers for Disease Control and Prevention announced Monday during an advisory panel.

The CDC has previously estimated that 97% of people in the hospital being treated for COVID-19 are unvaccinated, but that data was collected before the spread of delta, a hyper-transmissible variant that many doctors have warned appears to be making people sicker.

The latest CDC analysis estimates that the ability of the COVID vaccines to keep a person out of the hospital is now between 75% to 95%.

For people older than 75 in particular, vaccine effectiveness against hospitalization experienced the steepest decline, from more than 90% to 80% between June and July.

Health experts are also concerned that a person’s immunity could be waning over time, particularly among older people whose bodies are less likely than younger people to develop a strong immune response to the vaccines.

However, the vaccine still remains highly effective at preventing serious illness, according to the briefing.