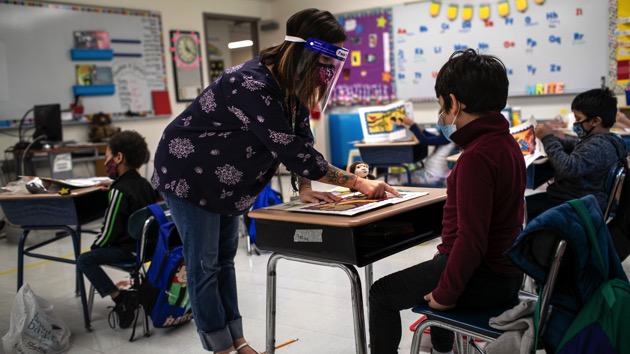 (NEW YORK) — As the COVID-19 pandemic has swept the globe, more than 5.6 million people have died from the disease worldwide, including over 868,000 Americans, according to real-time data compiled by Johns Hopkins University’s Center for Systems Science and Engineering.

About 63.4% of the population in the United States is fully vaccinated against COVID-19, according to data from the Centers for Disease Control and Prevention.

More than 1.1 million children tested positive for COVID-19 last week — nearly five times the rate of the peak of last winters’ surge, according to a report from the American Academy of Pediatrics and the Children’s Hospital Association.

A total of 10.6 million children have tested positive since the onset of the pandemic. A fifth of those children — over 2 million kids — tested positive in just the last two weeks, according to the two organizations.

Pediatric cases in the Northeast are seeing a dramatic drop but new cases in the West, South and the Midwest are still surging.

But there is positive news: COVID-19-related hospitalizations among children fell this week for the first time in one month.

The omicron surge appears to be letting up in New Jersey, where cases are now down by roughly two-thirds from two weeks ago, Gov. Phil Murphy announced.

While hospitalization numbers have been falling this week, Murphy stressed that they’re still “higher than anything we had seen with the two prior surges.”

“We also remain very concerned about the ICU and ventilator numbers, which are coming down much more slowly,” the governor said.

Following weeks of increasing infections, COVID-19 deaths in the U.S. are rising. The nation is now reporting nearly 2,000 new COVID-19-related deaths per day — up by 30% in the last two weeks, according to federal data.

But there’s continued evidence that the nation’s most recent surge may be receding in many regions. Thirty-one states as well as Washington, D.C., and Puerto Rico are now reporting decreasing or plateauing new case averages, according to federal data.

However, case levels in the U.S. remain incredibly high. In the last seven days, the U.S. reported more than 5 million new cases. Only 1% of U.S. counties aren’t reporting high transmission, according to federal data.

Former Republican vice presidential nominee Sarah Palin has tested positive for COVID-19, a Manhattan federal court judge announced Monday, as her libel trial against the New York Times was about to begin.

The libel case between Palin and the newspaper has now been delayed until Feb. 2.

Palin sued the New York Times after an editorial incorrectly linked her political rhetoric to the mass shooting that gravely injured Rep. Gabby Giffords. Palin is expected to testify.