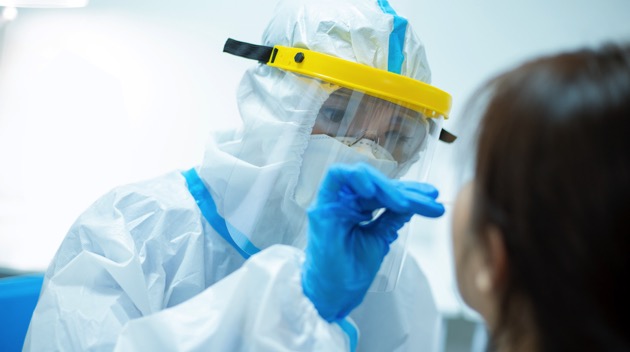 More than 639,000 Americans have died from COVID-19 while over 4.5 million people have died from the disease worldwide, according to real-time data compiled by the Center for Systems Science and Engineering at Johns Hopkins University.

Just 61.3% of Americans ages 12 and up are fully vaccinated against COVID-19, according to data from the Centers for Disease Control and Prevention.

Pfizer is launching a large clinical study for a new pill that it hopes could prevent worse symptoms for patients with mild COVID-19.

The first participant has now been dosed in this “pivotal Phase 2/3 clinical trial,” Pfizer said.

Drugs like Remdesivir and Dexamethasone can help people recover faster, but those are only reserved for people who are extremely ill and in the hospital.

If proven effective, Pfizer will ask the FDA for authorization.

Virginia Tech says 134 students have been disenrolled after they didn’t comply with COVID-19 vaccine requirements.

The university’s roughly 37,000 students were required to submit vaccination documentation or receive a medical or religious exemption, Virginia Tech said.

“The university does not know whether any of these [134] students were not planning to return for reasons unrelated to the COVID-19 vaccine requirement,” Virginia Tech said.

Sep 01, 9:19 am
TSA screens lowest number of travelers since May

San Diego has become the first county in the U.S. to declare that health misinformation is causing a public health crisis in its community. This follows the County Board of Supervisors’ 3-2 vote Tuesday night.

The new policy was introduced when 96.7% of hospitalizations in San Diego County were residents who were not fully vaccinated.

In a statement, the band said the 72-year-old was experiencing “mild symptoms.”

His diagnoses comes less than a week after co-lead singer Paul Stanley, 69, tested positive for COVID-19 as well.

In a statement released on Aug. 26, the band said that, “everyone on the entire tour, both band and crew, are fully vaccinated.”

KISS has postponed four of its “End of the Road” tour shows from Sept. 1 to Sept. 5.

“The band and crew will remain at home and isolate for the next 10 days,” the band said in a statement.

Peter Marks, the director of the Food and Drug Administration’s Center for Biologics Evaluation and Research (CBER), announced the upcoming departure of two top vaccine regulators to his staff in an internal memo, which was obtained by ABC News.

Dr. Marion Gruber, director of the FDA’s Office of Vaccines Research and Review (OVRR) and her deputy, Dr. Phil Krause, are set to leave the agency in October and November respectively, according to the memo.

Krause, who’s been with the agency for over a decade, and Gruber, who has been with the FDA for over 30 years, were instrumental in the review and authorization of the three COVID-19 vaccines, the memo said.

The memo said that Gruber will be “retiring” and gave no other details about Krause’s departure.

ABC News has reached out to both Gruber and Krause for comment.

When reached for comment about their departure, an FDA spokesperson told ABC News the agency is “confident in the expertise and ability of our staff to continue our critical public health work, including evaluating COVID-19 vaccines.”

Their departures come at a critical time for the vaccine review team. After facing pressure to move as fast as possible to get vaccines’ full licensure done, the agency is now weighing booster shots for a wider pool of Americans.

The timing of the booster shot approval has been a bone of contention amongst federal agencies after the Biden administration announced the availability of booster shots would begin ahead of any ruling from the FDA or Centers for Disease Control and Prevention advisory groups.

Jacqueline Jackson, the wife of civil rights leader Rev. Jesse Jackson, is out of the ICU as both Jacksons continue to fight COVID-19, their family said.

“Our father remains at The Shirley Ryan AbilityLab where he is continuing to receive intensive occupational and physical therapy,” their son, Jonathan Jackson, said in a statement Tuesday.

Jesse Jackson, who is 79 and has Parkinson’s disease, was vaccinated, reported ABC Chicago station WLS.

“Our mother remains in the Northwestern Memorial Hospital and has been moved out of the ICU and back into her regular hospital room where she continues to receive oxygen,” the statement said. “Both of our parents are continuing to receive excellent medical care and we thank God for the progress that both seem to be making.”

Aug 31, 4:24 pm
Vaccination rate nearly double than it was in mid-July

The U.S. vaccination rate per day is now nearly double than it was in mid-July, according to the White House.

The increase in vaccinations comes amid fear about the rapidly spreading delta variant.

The delta variant, which is more transmissible, has also been part of the conversation around booster shots of the mRNA and J&J vaccines. The Biden administration said Americans would need a third shot eight months after their second because of waning immunity.

The Biden administration is standing by its decision to call for vaccine boosters beginning Sept. 20 despite questions about whether there’s enough data and the unusual process of announcing a plan before the FDA has evaluated the data and made a recommendation.