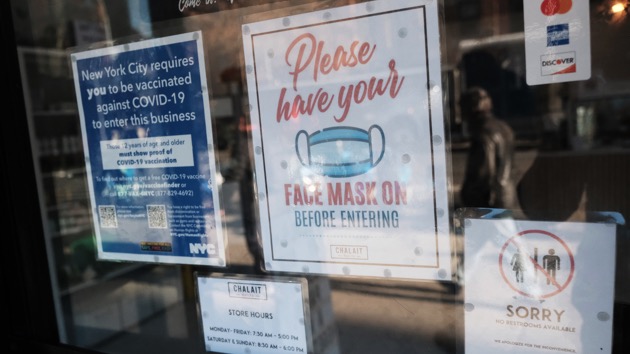 (NEW YORK) — As the COVID-19 pandemic has swept the globe, more than 5.7 million people have died from the disease worldwide, including over 915,000 Americans, according to real-time data compiled by Johns Hopkins University’s Center for Systems Science and Engineering.

About 64.3% of the population in the United States is fully vaccinated against COVID-19, according to data from the Centers for Disease Control and Prevention.

About 3,000 municipal workers in New York City — less than 1% of the city’s workforce — face termination Friday after refusing to abide by a COVID-19 vaccine mandate.

The requirement, established under former New York City Mayor Bill de Blasio, applies to municipal employees hired after Aug. 2, 2021, who were told to be vaccinated against COVID-19 as a condition of employment and to unvaccinated police officers, correction officers, firefighters and others who opted to forego city health benefits and are currently on leave because they are not vaccinated.

The mandate achieved a vaccination rate among municipal workers of more than 95%. A number of exceptions were approved in recent months.

New York City Mayor Eric Adams said Thursday that some workers initially facing termination had submitted their proof of vaccination, so the final number wasn’t yet clear. He reiterated that the stragglers aren’t being fired but are “quitting.”

The first vaccine shipments for children under 5 could arrive at pediatricians’ doors as soon as Feb. 21, according to a planning guide sent to states from federal health officials and obtained by ABC News.

Doses can ship once the FDA signs off.

The FDA’s independent advisory committee will meet on Tuesday and after that the FDA can issue an emergency use authorization.

The CDC’s independent advisory panel is expected to meet within days of the FDA’s authorization. Once the CDC signs off on its panel’s recommendations, vaccinations for kids under 5 can start.

CDC Director Rochelle Walensky acknowledged that it’s tough to make national guidelines to ease restrictions that will fit every different city and town.

“One of the challenging pieces has been how we make guidance that is general enough so that it can be applied to New York City and rural Montana and Indian country, which is our responsibility, and yet have it be specific enough so that people can get their questions answered,” Walensky said in a webinar in hosted by the COVID-19 Vaccine Education and Equity Project.

Looking to the future, Dr. Peter Marks, the FDA’s vaccine chief, said “Obviously the hope is — and I think it’s probably the 90% scenario — is that we’re going to now move into a period where … the virus becomes endemic. And we will be living alongside it probably in a period where we will start to get yearly boosters for it.”

But Dr. Sara Oliver, an epidemic intelligence service officer for the CDC, noted that, although there’s a drop in cases, the same hasn’t happened yet in hospitals.

“It’s difficult to envision a time point where we can say COVID is over if we’re still in a time period where our hospitals and ICUs are feeling the strain,” Oliver said.

Nevada Gov. Steve Sisolak on Thursday announced an immediate end to the state’s indoor mask mandate — including for schools — citing a rapid decline in cases and a drop in hospitalizations.

“Teachers & schools will no longer be required to wear masks but school districts will need to work with their local health authorities to have plans in place to deal with outbreaks,” the governor tweeted.

He added, “Employers and organizations, including school districts, may set their own policies, and I encourage them to work with their employees and communities to ensure that policies are in place.”

Masks in Nevada will only be required on public transit per federal law, or in special facilities like hospitals or long-term care facilities.