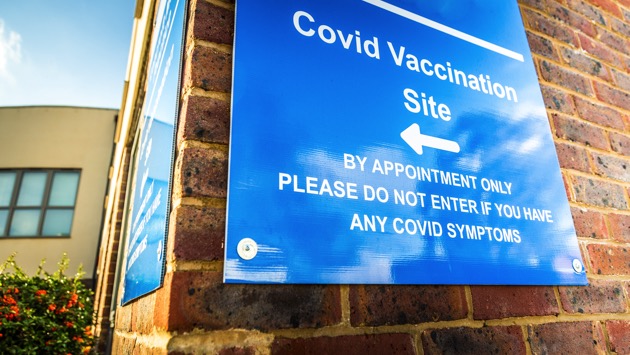 More than 634,000 Americans have died from COVID-19 while over 4.4 million people have died from the disease worldwide, according to real-time data compiled by the Center for Systems Science and Engineering at Johns Hopkins University.

Just 60.8% of Americans ages 12 and up are fully vaccinated against COVID-19, according to data from the Centers for Disease Control and Prevention.

A new peer-reviewed study estimates that the delta variant doubles the risk of being hospitalized if you’re unvaccinated compared to the alpha variant.

The study — an analysis of more than 40,000 COVID-19 cases from the United Kingdom — primarily included unvaccinated people, so the findings don’t apply to vaccinated people with breakthrough infections.

Vaccines dramatically reduce the risk of hospitalization and death for both the alpha and delta variants.

The U.S. is continuing to experience its steepest and most significant increase in hospitalizations in seven months, according to federal data. On Wednesday alone, more than 12,800 patients were admitted to the hospital with COVID-19, marking the highest number of patients seeking care over the span of 24 hours since January.

The U.S. is continuing to experience its steepest and most significant increase in hospitalizations in seven months, according to federal data. On Wednesday alone, more than 12,800 patients were admitted to the hospital with COVID-19, marking the highest number of patients seeking care over the span of 24 hours since January.

Half of all U.S. 12- to 17-year-olds have had their first vaccine shot, White House COVID-19 coordinator Jeff Zients said at Friday’s briefing, which he called “critical progress.”

“The vaccination rate among adolescents is growing faster than any other age group,” Zients added.

CDC Director Rochelle Walensky said a new CDC report out of Los Angeles County showed that schools following the health agency’s guidelines had 3.5 times lower cases during the winter peak as compared to case rates in the community. (This study did not account for the delta variant).

“Even when communities were experiencing high levels of COVID transmission, in the LA County study, layered prevention measures in schools provided a shield of protection, helped to keep COVID out of school and reduced the spread when cases did occur,” Walensky said.

She continued: “I want to strongly appeal to those districts who have not implemented prevention strategies and encourage them to do the right thing to protect the children under their care.”

A Tallahassee judge ruled Friday that Florida school boards can enact student mask mandates, going against Gov. Ron DeSantis, who in July issued an executive order that set off a public feud with school districts.

Judge John C. Cooper found that a blanket ban on face masks in schools “does not meet constitutional muster” and ordered the Florida Department of Education to stop enforcing a state rule that requires districts to allow parents to opt-out of mask mandates.

Cooper, over about two hours, picked apart the state’s defense, saying the science presented during the weeklong trial did not support the state’s argument against masking children.

Ten Florida school districts have adopted mask mandates for students this month. Two — Broward and Alachua — were sanctioned by the Florida commissioner of education, who said he would begin withholding the salaries of board members who voted to require masks.

DeSantis will “immediately appeal” the ruling, the governor’s press secretary, Christina Pushaw, said in a statement. “This ruling was made with incoherent justifications, not based in science and facts,” Pushaw said.

A spokesman for the Florida Department of Education said, “We are immensely disappointed that the ruling issued today by the Second Judicial Circuit discards the rule of law. This decision conflicts with basic and established rights of parents to make private health care and education decisions for children. … We are committed to the fundamental rights of parents and will push forward on appeal to ensure that this foundation of democracy is upheld.”

“Seeing nearly 5,000 cases and 65 Kentuckians that we lost in just one day’s report is tough,” the governor said, adding that “it is entirely preventable.”

Hospitalizations have increased every day in the last 42 days, he said.

On July 14, there were 60 people in intensive care units. As of Wednesday there were 549, he said.

COVID-19 vaccinations in Houston increased more than five-fold on Thursday as the city launched a new incentive program.

The Houston Health Department is now providing up to $150 in gift cards to get vaccinated against COVID-19. A total of 740 vaccine doses were administered at the health department’s eligible sites on Thursday, the first day of the program, marking a 51% increase over Wednesday’s total of 121 doses.

Of the total shots administered Thursday, 658 were first doses and 82 were second dose, according to a press release from the health department.

“It is indisputable that the public has a strong interest in combating the spread of the COVID–19 Delta variant. But our system does not permit agencies to act unlawfully even in pursuit of desirable ends,” the court wrote. “It is up to Congress, not the CDC, to decide whether the public interest merits further action here.”

“If a federally imposed eviction moratorium is to continue, Congress must specifically authorize it,” it continued. “The application to vacate stay presented to THE CHIEF JUSTICE and by him referred to the Court is granted.”

“As a result of this ruling, families will face the painful impact of evictions, and communities across the country will face greater risk of exposure to COVID-19,” Psaki said in a statement, before reiterating President Joe Biden’s call for states, localities, landlords and local courts to do what they can to prevent evictions.

The Biden administration has repeatedly called on Congress to act in regard to the eviction moratorium, but Republicans have opposed the proposals.

The CDC had issued a 60-day extension to the moratorium the first week in August after the previous one expired July 31.

Every state in the country is now reporting high community transmission of COVID-19, according to newly updated federal data.

The development comes as the delta variant has also rapidly spread. In June, the highly contagious variant accounted for just 26.4% of all new COVID-19 cases in the U.S.; today, it accounts for nearly 99%, according to the CDC.

The U.S. is continuing to experience its steepest increase in COVID-19 hospitalizations since the winter of 2020, with more than 101,000 patients now in hospitals, according to federal data. This marks the highest number of patients in seven months.

Eight weeks ago, there were under 12,000 patients receiving care.

The country’s daily death average has increased to more than 800 deaths per day. This is a 317% jump in the last seven weeks and marks the highest average since mid-March 2021.