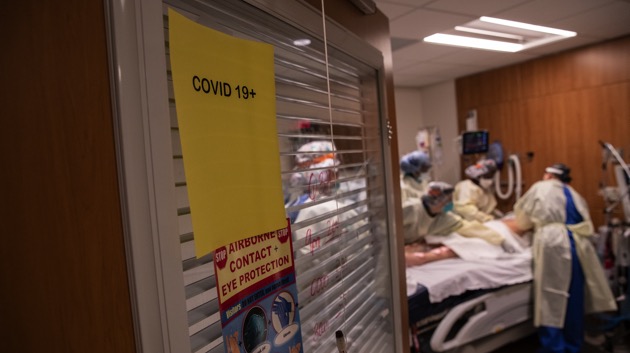 (NEW YORK) — As the COVID-19 pandemic has swept the globe, more than 5.3 million people have died from the disease worldwide, including over 800,000 Americans, according to real-time data compiled by Johns Hopkins University’s Center for Systems Science and Engineering.

About 61% of the population in the United States is fully vaccinated against COVID-19, according to data from the Centers for Disease Control and Prevention.

Dec 15, 8:09 am
Journalist traveling with Blinken tests positive for COVID-19 in Malaysia

A journalist traveling alongside U.S. Secretary of State Antony Blinken on his visit to Southeast Asia has tested positive for COVID-19 in Malaysia, according to U.S. Department of State spokesperson Ned Price.

Meanwhile, Blinken and his senior staff all tested negative for COVID-19 upon arrival in Kuala Lumpur on Tuesday night. The member of the traveling press pool who tested positive had last tested negative in Indonesia’s capital, their previous stop, on Tuesday.

“The individual who tested positive will remain in isolation,” Price said in a statement Wednesday, “and we will continue to adhere to and go beyond CDC guidance, including with our rigorous testing protocol, for the remaining traveling party.”

Blinken has canceled a scheduled trip to Thailand “out of an abundance of caution” and will return home to the United States, according to Price.

“The Secretary expressed his deep regret to the Foreign Minister that he would not be able to visit Bangkok this week,” Price said. “He explained that, in order to mitigate the risk of the spread of COVID-19 and to prioritize the health and safety of the U.S. traveling party and those they would otherwise come into contact with, the Secretary would be returning to Washington, D.C. out of an abundance of caution.”

“The Secretary extended an invitation for the Foreign Minister to visit Washington, D.C. at the earliest opportunity and noted that he looked forward to traveling to Thailand as soon as possible,” Price added. “They affirmed that they would use the upcoming engagements to further deepen the U.S.-Thai alliance.”

The U.S. Embassy in Malaysia confirmed that the infected individual “was not involved and has not participated in any of Secretary Blinken’s program in Kuala Lumpur.”

“The sole member of the traveling party who tested positive is observing all requirements of the Ministry of Health,” the embassy said in a statement Wednesday. “We confirm all other members of the party tested negative for COVID-19 upon arrival in Malaysia.”

Blinken was in Indonesia on Tuesday, and the U.S. Embassy in Jakarta confirmed that no members of the traveling party tested positive for COVID-19.

All members of the U.S. delegation are required to be vaccinated against COVID-19 and undergo regular testing on trips.

With winter closing in and COVID-19 cases on the rise, hospitals across the United States are once again facing the pressures of caring for thousands of patients.

More than 67,000 people are currently hospitalized with COVID-19 nationwide, according to federal data.

Rebecca Long, lead nurse in a COVID-19 intensive care unit at Nebraska Medical Center in Omaha, told ABC News that she and her team “literally do not have any ICU beds” available.

“I don’t want anyone else’s family member or loved one to have to be in the position where we say, like, we can’t help you because we don’t have the resources,” Long said. “As health care providers, all we want to do is help people and we can’t because we physically can’t.”

Dr. Kyle McCarty, medical director of emergency services at both HSHS St. Mary’s and HSHS St. Vincent hospitals in Green Bay, Wisconsin, told ABC News that health care workers are feeling burned out after “being asked to do more with less.”

“We’re exhausted by the knowledge that we are the duct tape that is preventing a complete collapse of the health care system,” McCarty said. “There’s a national shortage of hospital staff, which is making it difficult to take care of patients the way that we want it. There aren’t enough inpatient beds for the patients that need to be admitted to the hospital.”

“This is a call for reinforcements, not a warning to stay away, because we don’t want this to be the new normal,” he added. “If we can recruit more health care teammates, it doesn’t have to be.”

The number of people who have died from COVID-19 in the United States surpassed 800,000 on Tuesday, according to real-time data compiled by Johns Hopkins University’s Center for Systems Science and Engineering.

The figure is greater than the approximately 700,000 Americans who have died from AIDS-related illnesses over the last four decades, and it’s higher than the total number of U.S. troops who have fallen in battle since 1900.

Since last December, when the first COVID-19 vaccines were being administered, an additional 500,000 people in the U.S. have died from the virus.

Of those, some 230,000 have died since April 2021, when U.S. President Joe Biden announced COVID-19 vaccines were widely available to every American over the age of 18.

Dec 14, 6:59 pm
US sees sevenfold jump in omicron cases over the last week

The U.S. saw a sevenfold increase in the prevalence of the omicron COVID-19 variant over the last week, according to data from the U.S. Centers for Disease Control and Prevention.

Just over two weeks after it was first discovered in the country, the omicron variant is now estimated to account for nearly 3% of all new cases in the U.S., the latest data from the CDC shows.

Last week, omicron accounted for an estimated 0.4% of all new cases, according to the data.

Dr. Anthony Fauci told CNN Tuesday that omicron will “for sure” become the dominant strain in the U.S. given how rapidly it is spreading.

“Omicron is going to be a challenge because it spreads very rapidly,” Fauci said.

Fauci reiterated that omicron so far appears to be less severe, adding, “Whether it is inherently less pathogenic as a virus or whether there is more protection in the community, we’re just going to have to see when it comes in the United States.”

How recovery efforts are going in Lee County after Hurricane Ian