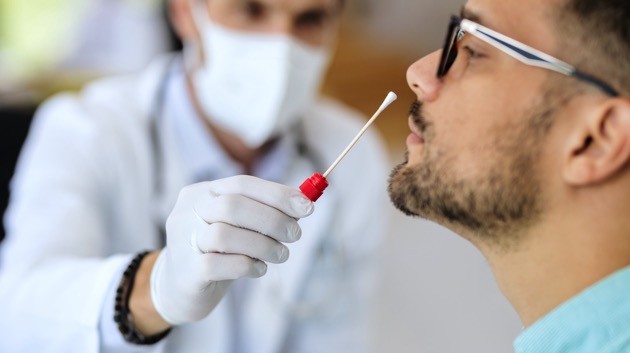 More than 696,000 Americans have died from COVID-19 while over 4.7 million people have died from the disease worldwide, according to real-time data compiled by the Center for Systems Science and Engineering at Johns Hopkins University.

Just 65% of Americans ages 12 and up are fully vaccinated against COVID-19, according to data from the CDC.

Since the beginning of September, the U.S. has seen a drop of more than 27,000 patients in hospitals across the country, according to federal data. A little less than half of those patients come from Florida.

Daily hospital admissions are down by nearly 15% in the last week and by 32% in the last month, according to federal data.

The country’s daily case average has fallen to 107,000 — a 33% drop in the last month. However, about 97% of counties are still reporting “high” or “substantial” community transmission.

Sep 30, 4:02 pm
Aladdin on Broadway to resume after COVID cancellation

Aladdin will return to Broadway Thursday night after Wednesday’s show was canceled due to several people in the production testing positive for COVID-19.

All members of Disney Theatrical’s companies must be vaccinated.

“Our extensive protocol system to test our employees and identify positive cases worked, and allowed us to act immediately to contain those cases,” production said. “Given the thoroughness of our Covid protocols and a vaccinated workforce, we remain confident that the environment is safe for our guests, cast, crew and musicians.”

Disney Theatrical Productions is a part of the Walt Disney Company, the parent company of ABC News.

The unvaccinated teachers said they should be given an option to regularly test rather than forced to get the shot and they accused the city of failing to explain why that alternative was not made available.

“If permitted to take effect, the August 23 Order will force thousands of unvaccinated public-school employees to lose their jobs — while other municipal employees, including those who have significant contact with children, are allowed to opt-out of the vaccine mandate through weekly COVID-19 testing,” the petition said.

“While a temporary interruption of work is not actionable, the mandate here would have a permanent effect: it is open-ended, where if a teacher never gets vaccinated, he or she will never be able to return to work,” the petition said.

A federal appeals court earlier this week dissolved a temporary injunction and allowed the mandate to stand. The city has given school employees until Friday afternoon to comply before enforcement begins Monday.

Out of the African continent’s 1.3 billion population, 60 million people have now been fully vaccinated against COVID-19, the World Health Organization said Tuesday.

Fifteen African countries met the WHO’s goal to fully vaccinate at least 10% of residents by Sept. 30. (Nearly 90% of high-income countries have met this target.)

Twenty-three million vaccines arrived in Africa in September, 10 times the number delivered in June. COVAX is working to identify countries that can absorb large volumes of vaccines.