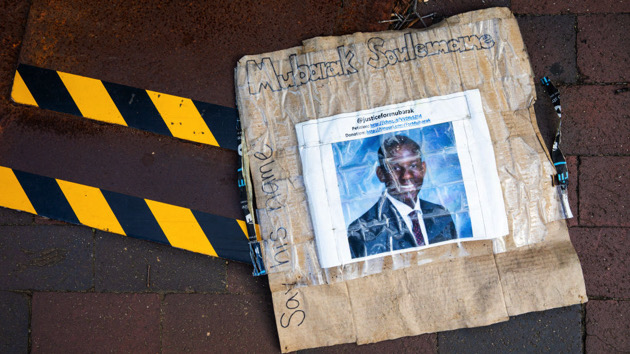 (MILFORD, Conn.) — Dozens of police officers from multiple states held a rally outside a Connecticut courthouse Tuesday as a white state trooper they contend was charged with manslaughter for doing his job was arraigned in the 2020 killing of a Black 19-year-old alleged carjacker.

Connecticut State Trooper Brian North, 31, appeared at a brief hearing in Superior Court in Milford, but did not enter a plea to a felony manslaughter charge stemming from the fatal shooting of Mubarak Soulemane.

North, who is free on $50,000 bail, did not speak at the hearing and a judge scheduled his next court date for June 2.

Soulemane’s mother, Omo Klusum Mohammed, attended the hearing and later said she and her family would not be intimidated from pursuing justice.

“I feel in my heart they were here to try to intimidate us,” Mohammed said at a post-hearing news conference outside the courthouse. “But there is no officer or any trooper who will intimidate us. We are here to stand for justice, and I’m here to stand for justice for my son, Mubarak Soulemane. And I hope and pray justice will be served and Brian North will go to jail.”

Mohammed vowed to attend every court hearing to ensure North is held accountable for her son’s death.

“We are here today for justice, justice for my son Mubarak Soulemane, who has been massacred by state Trooper Brian North,” Mohammed said.

Mohammed’s attorney, Stanford Rubenstein, added, “Ultimately, this case will be decided on the evidence. And I believe once pictures of the truth, video of what happened, is shown to a jury, they will come to the same conclusion I have: that this was an execution.”

North was arrested last month and charged in Soulemane’s death after the state inspector general released a lengthy report alleging North’s use of deadly force was not justified in the January 2020 shooting of Soulemane.

State Inspector General Robert Devlin Jr.’s investigation found that although Soulemane was allegedly armed with a steak knife, had stolen a Lyft rideshare vehicle and was apparently off his medication for schizophrenia, he was not a threat to North and other officers when he was shot multiple times.

Soulemane was killed when North allegedly fired seven times at him through the closed driver’s side window of a stolen Lyft vehicle after troopers stopped him and pinned him in on Interstate 95 in West Haven following a chase that reached speeds of 100 mph, according to the report.

Devlin’s investigation found that Soulemane was sitting behind the wheel of the car surrounded by troopers and officers from other agencies. He was trapped inside because North’s cruiser was blocking the driver’s side door.

An officer from the West Haven Police Department was bashing in the passenger-side window with a baton and another trooper was poised to deploy a stun gun on Soulemane when North opened fire as Soulemane reached into his pocket and pulled a knife, according to the report.

“Stated briefly, the investigation establishes that, at the time Trooper North fired his weapon, neither he nor any other person was in imminent danger of serious injury or death from a knife attack at the hands of Soulemane,” the inspector general concluded in his report. “Further, any belief that persons were in such danger was not reasonable. I therefore find that North’s use of deadly force was not justified under Connecticut law.”

But several dozen state police officers from Connecticut, Massachusetts, New Jersey and Pennsylvania who rallied in support of North outside the courthouse on Tuesday said they strongly disagree with Devlin’s findings.

Andrew Matthews, executive director of the Connecticut State Police Union, said he and other union members believe North should not have been charged.

“When our troopers are, what we believe, prosecuted for doing their job, we will defend them,” Matthews said at a news conference outside the courthouse prior to North’s hearing. “We will defend their actions when we believe that they are justified in doing and performing their duties to protect the public.”

Matthews said he and other members of the union felt “obligated” to rally around North, adding, “our troopers put their lives on the line every day to protect the public.”

“And when people make split-second decisions that others can review over and over again and form their own judgment of what they did or what they would have done, we have to stand up for our troopers,” Matthews said.

North’s attorney, Jeffrey Ment, declined to comment on the case, but said, “Trooper North appreciated the support of his brother and sister officers from not only Connecticut, but also from surrounding states.”