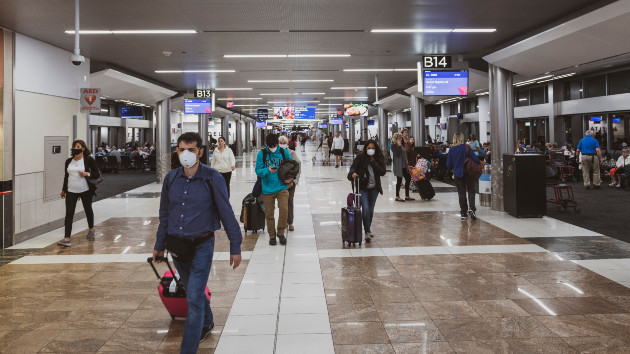 (NEW YORK) — Brooke Tansley and her husband Scott Herrmann were aboard a Delta flight from Atlanta to Los Angeles on Monday with their two young children when the pilot told passengers over the loudspeaker that masks were now optional.

“I’m sorry to interrupt you, but I think you’re going to want to hear this. I have some really exciting news,” Tansley remembers the pilot saying. “The TSA (Transportation Security Administration) has lifted the mask mandate. You can all take off your masks.”

Tansley could hear scattered cheers and applause. She was stunned, then scared.

The couple had gone to extraordinary lengths to protect their kids who at ages 4 years old and 8 months old still don’t qualify for a vaccine. Her youngest also can’t wear a mask, and she had planned during her trip to meet up with a coworker who was immunocompromised. It was their first flight since the pandemic began.

“I don’t begrudge him his excitement,” she told ABC News of the pilot. “I just wish that he would have taken a minute to consider people in different circumstances and the decision he was making on behalf of everyone on that plane.”

“We empathize with all who are navigating this sudden change in federal policy. As we work to provide our customers and people the most up-to-date information for their travels, we continue to encourage everyone to be patient and understanding with one another. Nothing is more important than the safety of our customers and people,” the airline said in a statement to ABC News.

For a pandemic that seems never-ending, the federal government’s 15-month travel mask mandate came to a surprisingly abrupt end Monday after a Trump-appointed federal judge declared the mandate unlawful. Major airlines swiftly dropped the mandate they had grown to loathe, along with Amtrak, Uber and Lyft.

But airports in New York and Philadelphia kept their mask mandates intact — creating the confusing situation that people could fly maskless from one airport but have to put it back on depending upon where they land.

The Biden administration, which had recently renewed the mandate until May 3, seemed to be caught off guard by the judge’s decision, scrambling in the hours that followed to respond to questions. On Monday evening, an administration official told reporters that the TSA would no longer enforce the rule, even though federal health experts at the Centers for Disease Control and Prevention (CDC) would still recommended masks while traveling.

“This was deeply disappointing,” tweeted Dr. Ashish Jha, the White House coordinator for COVID-19. “CDC scientists had asked for 15 days to make a more data-driven durable decision. We should have given it to them.”

As of late Tuesday, though, it remained unclear how hard President Joe Biden might fight the ruling. The Justice Department said in a statement it would appeal the recent ruling if the CDC deemed it necessary. The CDC was noncommittal.

“CDC continues to recommend that people wear masks in all indoor public transportation settings. We will continue to assess the need for a mask requirement in those settings, based on several factors, including the U.S. COVID-19 community levels, risk of circulating and novel variants, and trends in cases and disease severity,” the agency said in a statement.

The biggest hint though came from Biden himself. With the clock ticking toward the May 3 deadline, Biden suggested to reporters that a legal fight on masks wasn’t his priority.

When asked if people should continue to wear masks on planes, Biden responded tersely: “That’s up to them.”

Several legal experts told ABC that the Biden administration might not want to pursue a legal challenge for both pragmatic and political reasons. For one, by the time any kind of legal wrangling takes place, the administration might be willing to let the mask mandate expire anyway.

Another factor is that the case would likely have to go before the U.S. Supreme Court, where a favorable ruling isn’t a sure bet. The high court’s conservative majority has ruled against federal powers on other pandemic-era restrictions related to housing evictions and vaccine mandates for private industry.

“Politically and legally, the administration is not going to have a lot of incentive to pursue this,” said Sarah Isgur, an ABC News contributor and former Justice Department official during the Trump administration.

Jeffrey Lubbers, a professor of administrative law at American University’s Washington College of Law, said he thinks the Florida judge’s ruling was “highly questionable” and that there’s ample room to challenge it. But whether the administration fights to defend the mandate would probably have more to do with preserving the federal government’s power to prevent the spread of communicable diseases — a power that could be useful in the future.

“This mandate is supposed to expire in two weeks, and it’s also an unpopular mandate. So, it it worth going to court?” he said. But on the flip side, “what happens in two or three months if there’s a new variant and we have a ruling on the books that says CDC can’t regulate this? The government has a political calculation here too.”

Isgur said it’s possible the administration also is considering the upside of having a court ruling to blame if COVID cases increase as a result of the mandate being lifted.

“At some point, the pandemic restrictions had to end, and no one wants to be left holding the bag,” she said.

As for Tansley, she said she hopes people will be compassionate and consider the immunocompromised and families like hers whose kids remain unprotected. She also doesn’t know how her family will get home next week and whether they’ll make the decision to fly again.

“It made me sad and upset to know that my family and my coworker’s safety have been put at risk because of one powerful person in a position and then a pilot who made a call to change the policy in mid-flight. It was something that could have easily waited,” she said.