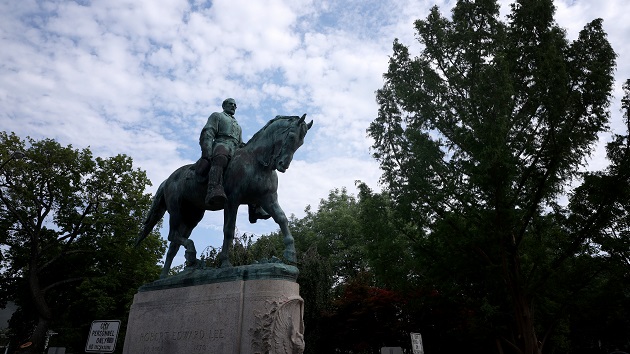 (CHARLOTTESVILLE, Va.) — Two bronze Confederate statues at the center of yearslong debate in Charlottesville, Virginia, will be removed this weekend, officials announced.

The removal comes more than five years after the first effort to remove the Lee statue. A year later, the monument became a gathering point for white supremacists who decried the proposal at the “Unite the Right” rally in August 2017, which led to rioting and left one woman dead.

Only the statues themselves will be removed Saturday; the stone bases will be left in place temporarily and removed at a later date.

Designated public viewing areas for the removals will be set up in Market Street Park and Court Square Park, where the statues are located, officials said in a news release.

Preparations commenced Friday around Market Street Park with officials setting up protective fencing and posting notices in the area.

The removal comes following a resolution passed by the Charlottesville City Council on June 7, which authorized the city manager to remove the statues for placement in storage.

Lawsuits by the statues’ supporters were filed and halted the removals since the original city council vote in 2017 to remove them. However, in April the Virginia Supreme Court overturned a lower court ruling that contended state law protected the monuments.

The city council has the sole authority to determine the final disposition of the statues, officials said in the news release.

Both statues will be stored in a secure location on city property until a final decision on their fate is made.

The city has solicited museums, government branches and the military to see if they have interest in the statues. So far, the Charlottesville city manager has received 10 responses — six from out of state and four from in state and they’re all under review.