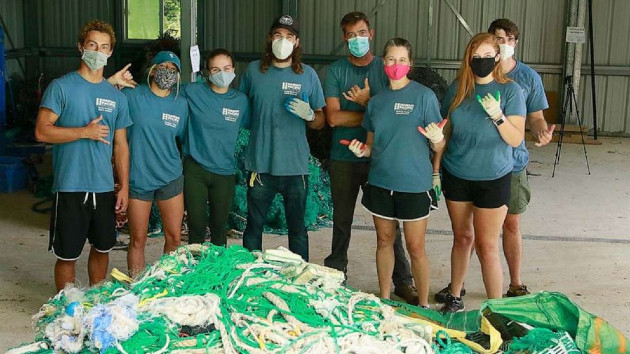 (NEW YORK) — Those who make their living out on the open ocean now have the opportunity to partake in a side hustle that simultaneously tidies up the environment.

Commercial fishermen have been offered a “bounty” to collect derelict fishing gear, often the culprit of the death of marine animals, and bring the debris back to shore.

Hawaii Pacific University’s Center for Marine Debris Research has launched a project to pay eligible commercial fishers to remove fishing gear at sea before it strikes Hawaii’s coral reefs or wildlife, according to a press release from the university.

The fishermen will be paid a bounty of between $1 and $3 per dry pound of derelict fishing gear found at sea and brought back to Oahu, the research center said.

The research center first tested the program between 2020 and 2021, when researchers trying to determine where the fishing gear was coming from paid fishermen who were already fishing near the northwest Hawaiian islands, the main Hawaiian islands and the North Pacific gyre a bounty to collect the debris and bring it back, Raquel Corniuk, research manager for Hawaii Pacific University’s Center for Marine Debris Research, told ABC News.

“So it’s incentivizing them when they’re already coming across this stuff, and then they can get paid to bring it back,” Corniuk said.

The research center recognized a “vessel of opportunity” once they began receiving positive feedback from fishermen who participated, Corniuk said.

Now, in partnership with the National Oceanic and Atmospheric Administration’s Marine Debris Program, the Hawaii Longline Association and Hawaii’s Department of Land and Natural Resources, the program has enough funding to pay to remove 100 metric tons, or 220,462 pounds, of derelict fishing gear over the next two years.

The pollution is one of the most harmful forms of marine debris to marine animals and habitats.

The fishing gear entangles and drowns animals, such as sea turtles, whales and sharks, and smothers and kills the coral reefs surrounding the shores, according to the research center.

The majority of the pollution that washes onto the beaches of Hawaii is derelict fishing gear, Corniuk said.

“When I first saw the damage caused by these large ghost nets on corals in Kane’ohe Bay, I was motivated to prevent it from happening,” Corniuk said, describing the new program as a “win-win” for fishermen and marine environments, especially considering the fishing gear can be a navigational hazard and often gets caught in vessels.

The debris will be repurposed by artists, educators and recycling researchers, according to the research center. Any remaining debris will be converted to electricity for the city and county of Honolulu.

The university is conducting another study to determine where the derelict fishing gear is originating from, likely not Hawaii-based fisheries, according to the research center.

“Derelict fishing gear and ghost nets continue to be a persistent economic and ecological threat to Hawaii,” the coordinator for NOAA’s Marine Debris Program’s Pacific Islands Region, Mark Manuel, said in a statement. “Our ultimate goal is to have a sea free of debris.”