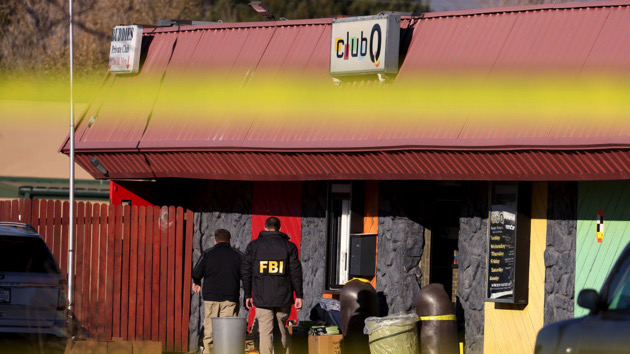 (COLORADO SPRINGS, Colo.) — The man suspected of opening fire at an LGBTQ nightclub in Colorado’s second-largest city over the weekend was previously arrested in an alleged bomb threat incident last year, ABC News has learned. But authorities said it’s unclear whether the state’s red flag law could have prevented the mass shooting.

According to a press release posted online last year by the El Paso County Sheriff’s Office, deputies responded to a report of a bomb threat on Rubicon Drive in the Lorson Ranch neighborhood of Colorado Springs, just south of the city’s airport, on the afternoon of June 18, 2021. A woman had called, saying “her son was threatening to cause harm to her with a homemade bomb, multiple weapons, and ammunition,” the sheriff’s office said. She was not at home at the time and was not sure where her son was.

Deputies were deployed to the woman’s home and realized that the suspect — identified as then-21-year-old Anderson Lee Aldrich — was actually at another residence on Pilgrimage Road, about a mile away. They contacted Aldrich by telephone and he “refused to comply with orders to surrender,” the sheriff’s office said.

A tactical support unit was called in and approximately 10 homes in the immediate surrounding area were evacuated, while an emergency notification was sent to cellphones of residents within a quarter-mile radius, according to the sheriff’s office.

A crisis negotiations unit ultimately was able to get Aldrich to comply with orders. He walked out the front door of the home and was taken into custody that evening, officials said. The regional explosives unit then cleared both residences and did not find any explosive devices, the sheriff’s office said.

Aldrich was booked into the El Paso County Jail on two counts of felony menacing and three counts of first-degree kidnapping, according to the sheriff’s office. Colorado Springs ABC affiliate KRDO reported on the incident at the time.

Aldrich, now 22, allegedly began shooting a long gun as soon as he entered Club Q in Colorado Springs late Saturday night. At least five people were killed and 17 others were wounded by the gunshots, according to the Colorado Springs Police Department.

Police said “two heroes” confronted Aldrich and fought with him, stopping him from shooting more people. Officers responded to the scene and detained Aldrich just after midnight, less than six minutes after the first 911 call came in, according to police.

Aldrich was injured in the alleged incident and remains hospitalized. As of Monday, he was being held without bond on 10 “arrest only” charges — five counts of first-degree murder and five counts of committing a bias-motivated crime causing bodily injury, according to online court records for Colorado’s El Paso County. Colorado’s Fourth Judicial District Attorney Michael Allen, who serves El Paso and Teller counties, told reporters Monday that those charges “are only preliminary” and subject to change once formal charges are filed.

The court has sealed the arrest warrant and supporting documentation connected with Aldrich’s latest arrest. According to the motion by prosecutors, if the records were “released, it could jeopardize the ongoing case investigation.”

Law enforcement officers briefed on the investigation confirmed to ABC News that Aldrich was previously arrested in an alleged bomb threat incident in June 2021, after the El Paso County Sheriff’s Office was alerted that he was in possession of a homemade bomb.

Officials briefed on the investigation told ABC News the gun Aldrich allegedly used in Saturday’s shooting was a legally purchased assault-style rifle and that his 2021 arrest may not have appeared on background checks because the case does not appear to have been adjudicated.

Colorado Springs resident Leslie Bowman told ABC News that she was renting a room to Aldrich’s mother, Laura Voepel, at the time of the bomb threat incident in June 2021. Bowman’s home on Pilgrimage Road was where the police standoff with Aldrich and his ultimate arrest took place, she said.

Authorities initially went to Voepel’s mother’s house on Rubicon Drive before responding to Bowman’s residence on Pilgrimage Road, according to Bowman.

“[Aldrich] apparently had an altercation with his grandparents and threatened them with a weapon,” Bowman told ABC News via telephone on Sunday. “He left their house, which was less than five minutes from my house, …and came over to my house and Laura let him in. And I know that he brought in a gun.”

Bowman said Aldrich livestreamed a “shocking” video via his mother’s Facebook account from inside Bowman’s home while authorities were outside, showing himself with a gun as well as a helmet and vest that resembled body armor. Security cameras at Bowman’s home also captured Aldrich entering the residence that day and surrendering to authorities hours later. ABC News has obtained the since-deleted Facebook Live video as well as the aforementioned footage from Bowman’s Ring doorbell camera.

“I was told at the time that there were explosives involved. But I’ve also since been told that maybe there wasn’t,” she told ABC News. “I didn’t get any follow up from the police or the DA or anyone about the case after the incident to testify or anything else. I just didn’t get any follow-ups and so I had very little information on what they did actually find.”

Voepel lived there for a total of roughly 15 months and moved out two days after the incident, according to Bowman.

Last month, on Oct. 18, deputies from the El Paso County Sheriff showed up at Bowman’s home seeking to conduct a wellness check on Voepel, according to Bowman, who said she hasn’t heard from Voepel or Aldrich since the alleged bomb threat incident last year.

After reading a local news report, Bowman said she learned that the case against Aldrich was dropped in court at some previous date and the records were sealed.

“I just thought it was really strange,” she told ABC News. “But again, I was like, well, I haven’t heard from these people in over a year, nobody was hurt and [I’m] just going to move on with my life.”

On Sunday morning, when Aldrich was identified as the suspect in the nightclub shooting, Bowman said she was “shocked and horrified.”

“It made me very upset and angry that this person who did what he did last year, obviously had violent intentions, was let go and now five people are dead,” she told ABC News. “I think there’s a lot of questions that need to be answered.”

Bowman said the only other incident involving Aldrich being aggressive toward her happened at her home one night when she returned from a long road trip and Voepel complained to her about a problem with the bathroom.

“I was like: ‘Well, you know, it’s late, I’m exhausted. I’ll have to deal with this tomorrow.’ And she and I kind of got into it a little bit,” Bowman recalled. “Andy got in my face and, because I was standing at her bedroom door, he told me to get out and slammed the door in my face.”

“I just kind of chalked it up to, you know, teenage guy, you know, trying to be aggressive and protect his mom kind of thing,” she added. “I just let it go and there weren’t really any problems with him after that. You know, just that one kind of display of aggression and everything else was fine up until the bomb threat situation.”

Motive ‘has the trappings of a hate crime,’ mayor says

Colorado Springs Mayor John Suthers told ABC News that the suspect “had considerable ammo” and “was extremely well armed” when he allegedly walked in to Club Q. While a motive remains under investigation, Suthers said “it has the trappings of a hate crime.”

“But we’re going to have to see what the investigation shows in terms of, you know, social media and things like that to make a clear determination exactly what the motive was,” the mayor said in an interview on Monday.

“He’s never spent money on a credit card or ID ever scanned in our business that we know of,” Grzecka said in an interview on Sunday. “I think this was a community of target for him.”

Although the suspect may not have been known at the LGBTQ nightspot, which has been serving the Colorado Springs community for two decades, Aldrich was clearly known to local law enforcement. However, Colorado has very strict privacy laws when it comes to cases that were dismissed. Once dismissed, cases are sealed and authorities are prohibited from mentioning their existence, which apparently is why officials initially had not been forthcoming about Aldrich’s prior arrest.

ABC News and other news organizations have petitioned the court in Colorado to unseal the records regarding Aldrich’s 2021 arrest.

During a press conference on Sunday morning, police declined to say whether Aldrich is the same person arrested in last year’s bomb threat incident.

When given details of Aldrich’s previous arrest, El Paso County Sheriff Bill Elder told ABC News that he did not recall and had no information about the June 2021 incident.

“I have 900 employees, so, you know 550 sworn [deputies] — it’s the largest county in Colorado,” Elder said via telephone on Sunday. “I wouldn’t have any clue.”

Elder also told ABC News that he doesn’t know whether more enforcement of Colorado’s red flag law in El Paso County would have made a difference in the shooting at Club Q. The state’s red flag law, which went into effect in 2020, allows relatives, household members and law enforcement to ask a judge to order the seizure of a gun owner’s weapons if that owner is believed to be a risk to themselves or others.

“I don’t know anything specific about the shooter, so I don’t know if it would have mattered or not,” Elder said.

When asked whether Aldrich should have been allowed to possess weapons following his arrest in June 2021, the Colorado Springs mayor told ABC News that state law “prevents law enforcement at this point in time from commenting on any prior criminal activity.”

“But I think the district attorney will go to court today and we’ll be able to comment on any prior interaction with the police fairly quickly, hopefully in the next couple of days,” Suthers said in Monday’s interview.