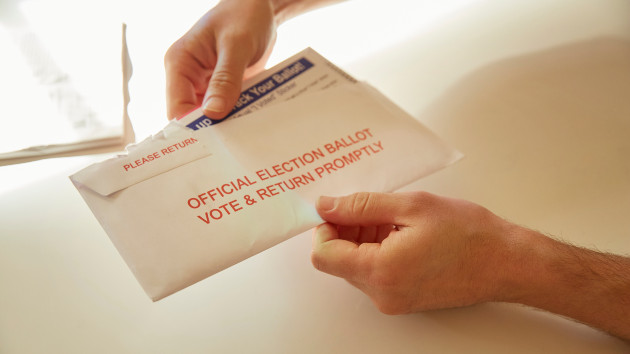 (DENVER) — Authorities in Colorado are investigating a “suspicious, powdery substance” found in a ballot mailed to the Adams County elections office in what officials say “appears to be an attempt to disrupt the elections process.”

Hazmat units, paramedics, firefighters and other law enforcement agencies were called to the county offices after the ballot was received Wednesday, and initial testing of the substance was negative for explosives, biological agents and narcotics, Adams County clerk Josh Zygielbaum said Thursday.

But Zygielbaum said the powder contained a “concerning, unknown chemical,” so samples have been sent for further testing.

FBI officials in Denver confirmed Thursday that they are supporting local law enforcement in the investigation.

“It really drives home what we’ve been concerned with, but we’ve got great plans in place and will ensure that the election goes off without a hitch,” Zygielbaum told ABC News. “And even if we have individuals who are going to try to disrupt the process, we will work around them to make sure it gets done.”

“The voter’s anonymity is protected and their constitutional right to vote is in place,” Zygielbaum said. “Should it be determined safe, we will move forward with processing this ballot.”

The incident comes as election officials across the country continue to see a rise in threats and harassment with the approach of Election Day.

Zygielbaum told ABC News in May that he wears a bulletproof vest to work — one of the many safety measures he says he’s been forced to take as the state has emerged as a battleground in the shadowy world of election conspiracy theories.

Appearing this week on an episode of ABC News’ Impact x Nightline, Zygielbaum was asked by ABC News’ Terry Moran what that says about the state of the country.

“It says that our democracy isn’t as healthy as it should be right now,” he replied.