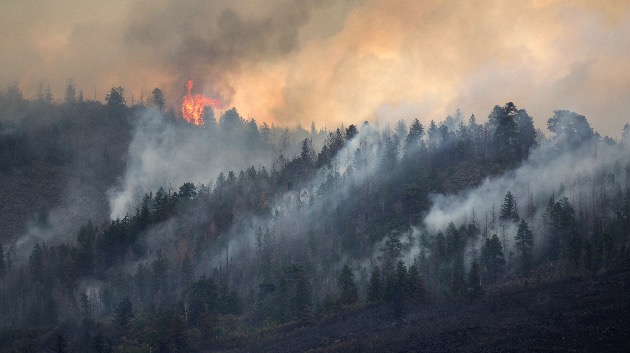 (NEW YORK) — A wildfire is currently blazing through the mountains of Southern California ahead of the area’s typical fire season. While authorities suspect the Pacific Palisades Fire may have been ignited by an arsonist, the fire, which has currently spread to over 800 acres, offers more evidence that climate change is affecting the behavior of fires in the West, experts say.

Now that fire season has extended to at least 84 days since the 1970s — beginning in May and lasting through September — the California Department of Forestry and Fire Protection has declared that the dry season essentially lasts all year.

While the warm, dry climate that serves as fuel for wildfires has always been the norm for much of the West, hotter overall temperatures on Earth are exacerbating typical environmental conditions all over the world. And the drought isn’t going anywhere, according to the Climate Prediction Center’s forecast for the summer, which shows much of the U.S. suffering from drought through July 31.

The dry season on the West Coast is getting hotter and longer, leading to less snowfall during the wet season and later, less moisture on the ground to detract wildfires when the dry season is back again.

The hot, dry air also absorbs water from everything, including plants, soil, lakes and rivers. As it gets hotter, the amount of moisture the atmosphere can absorb increases exponentially. California has warmed 3 degrees since the 19th century, which results in a massive difference in the way soil and vegetation dries out and can help explain the record-breaking wildfires year after year.

Drought conditions from California to Nevada, Arizona, Utah and New Mexico have been so bad that officials began preparing for the fire season in April. For some states, the staggering drought could be the worst in centuries.

The acreage burned so far in California is three times the five-year average for early May, according to CalFire.

Earlier this month, the National Weather Service in California released an update stating that northeast California and northwest Nevada will likely experience the worst second sequential year of drought in more than 30 years. There was also very little-to-no moisture in the U.S. Southwest. Places like Phoenix saw less than a third of what they should have over the winter.

In addition, large patches of wildfire-resistant trees, such as conifers, are gone and take decades to reforest. They have been replaced by flammable groundcover and grasses that can burn quickly.

The current Live Fuel Moisture, the moisture content within living vegetation, is comparable to early July conditions due to a very dry rainy season. Tucson had its second-driest monsoon season on record.

This year’s fire season is expected to be extremely dangerous, especially considering the fire behavior of the blaze burning in the Pacific Palisades in Southern California, Curt Kaplan, meteorologist for the National Weather Service, told ABC News.

Most fires are human-caused, and forest management choices and an increasing urban-wildlife interface are also to blame for the current wildfire threat. But, the behavior of the fires after they start and how they spread can largely be attributed to climate change.

“What we’re seeing with the fire activity really is climate change, and it really is climate change smacking us in the face,” Dr. Phillip Duffy, climate scientist and president and executive director of the Woodwell Climate Research Center, told ABC News in September following a particularly active fire season in which dozens of major wildfires were burning at ounce.