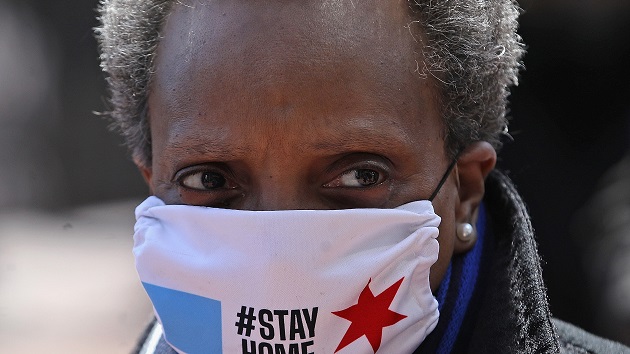 (CHICAGO) — Chicago Mayor Lori Lightfoot said the city won’t open the vaccine to everyone 16 and older along with the rest of the state in two weeks due to a “quantum leap” in coronavirus cases.

Gov. JB Pritzker announced that anyone 16 and older could get the crucial shot starting April 12, following many other states in expanding vaccine eligibility.

“We have over 400, almost 500 cases, on average as of today. That’s a quantum leap from where we were even three weeks ago,” Lightfoot said at a press conference on Wednesday.

Lightfoot noted that the uptick in cases emerged primarily on the North Side of the city in neighborhoods like Old Town, Lakeview, Lincoln Park and Portage Park, especially among 18-to-39-year-olds.

“We’re not going to see anything more significant in the reopening front until we see those numbers stabilize and start to come down,” Lightfoot said.

She blamed the spike in infections on young people resuming life as normal as the warm weather moves in. She tweeted Tuesday, “Folks, the pandemic is not over. Warmer weather is not an excuse to make reckless decisions.”

The governor disagreed with Lightfoot’s decision.

“I’m concerned, I will be honest with you, that the city of Chicago seems to want to delay beyond April 12,” he said, speaking at an unrelated press conference on Wednesday. “We should be getting every dose into every arm that we possibly can.”

On Monday, Chicago entered Phase 1C, which opened eligibility to anyone 16 and older with qualifying medical conditions, plus more types of essential workers — food and beverage employees, media members and clergy among them.

As of Thursday, 14.4% of the entire Chicago population has been fully vaccinated, according to city data.

Pritzker and Lightfoot have sparred over COVID-19 guidelines and the handling of the pandemic over the past year.

In October, the two officials, the state’s most powerful Democrats, clashed when Pritzker ordered for a ban on indoor dining and bar service in the city, citing an uptick in COVID-19 cases and hospital admissions. Lightfoot argued those businesses needed to stay open to support the economy.

In March of 2020, the two also disagreed over closing public schools. Pritzker ordered all state schools to shutter on March 13, overruling Lightfoot, who expressed concern over keeping kids safe and making sure they had enough to eat.

Lightfoot has demanded more doses be be sent to the city before she opens up eligibility.

Officials announced on Tuesday that Chicago will open two additional mass vaccination sites on Monday — one at a conference center next to Wrigley Field and the other at Chicago State University.