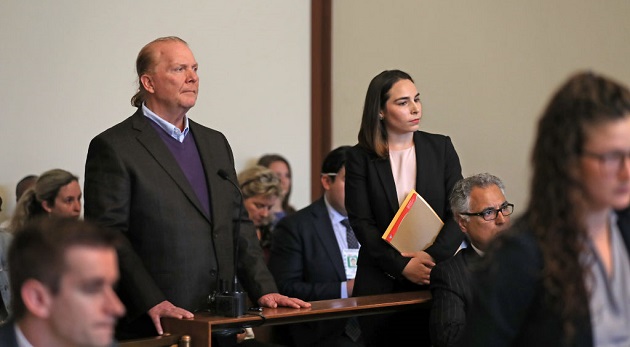 (BOSTON) — Celebrity chef Mario Batali has been found not guilty of indecent assault and battery for a 2017 incident in Boston.

“It’s an understatement to say that Mr. Batali did not cover himself in glory on the night in question. His conduct and his appearance and his demeanor are not befitting of a public person of his stature at that time,” Boston Municipal Court Justice Judge James Stanton said Tuesday.

But the judge added, “This case is about credibility. And it’s the court’s job to adapt to assess the credibility of the witnesses. … The complaining witness has significant credibility issues.”

Natalie Tene, 32, said Batali forcibly kissed her and grabbed her breasts, buttocks and groin after meeting him in a Boston bar while having a drink with a friend in March 2017.

Under cross-examination, Tene repeatedly said she did not remember text messages she sent to friends that described her meeting Batali as “exciting.” In one message, she suggested to a friend she could “hopefully” get $10,000 for photos of the encounter.

After two days of testimony and two hours of deliberation Stanton ruled that the defendant had a financial motive for making the accusations. Stanton rendered the verdict directly as the sole decider of the case since Batali waived his right to a jury trial.

On Monday, at the start of the trial, Tene said she was speaking out “to be able to take control of what happened,” while a defense attorney for Batali called her a liar who is twisting the truth “for money and for fun.”

Tene claimed Batali was “grabbing me in ways I had never been touched before, squeezing between my legs … pulling me closer to him.”

Batali maintained that he was not guilty of the allegations.

Mario Batali takes leave of absence, apologizes to those ‘I have mistreated and hurt’
The alleged assault took place after the accuser asked the chef for a selfie. He smelled of alcohol and appeared intoxicated, she alleged. Tene has also filed a civil complaint for unspecified damages based on the same allegations that will be tried separately from this case.

Though this case was the only one to go to criminal trial, four women accused Batali of inappropriate touching in December 2017, which prompted him to leave the ABC daytime cooking show “The Chew” and remove himself from his restaurant business. In a statement at the time, Batali said he was “so very sorry” for disappointing his friends, family, co-workers and fans.