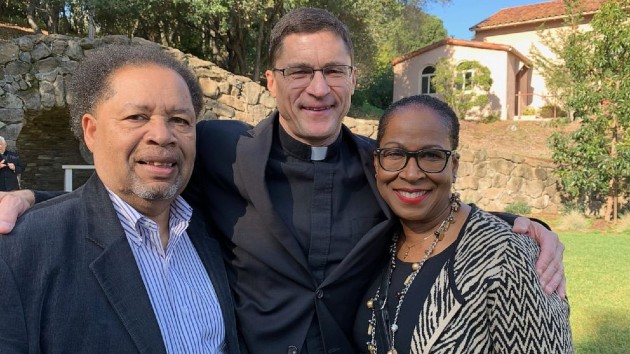 (NEW YORK) — The Jesuit Conference of U.S. and Canada, an order of the Catholic Church, announced the goal of raising $100 million to benefit the descendants of enslaved people historically owned and sold by Jesuits.

The money will go toward a newly formed foundation, the Descendants Truth & Reconciliation Foundation, that was created by the church in partnership with the GU272 Descendants Association, a group of descendants of enslaved people who were sold by Jesuits in 1838.

“Jesuits have always known our history of slaveholding, but it was not until 2016 that we met the descendants of Jesuit slaveholding and that completely changed our understanding of this historic sin,” Fr. Tim Kesicki, president of the Jesuit Conference, told ABC News.

“I think for a church which preaches forgiveness and reconciliation, this is an incredible opportunity to model what true reconciliation is,” he added.

Kesicki said the vision is ultimately to create a “billion-dollar foundation,” and that the Jesuit network is committed to raising the first $100 million.

Joe Stewart, the acting president of the foundation, told ABC News that its goal “is to change the conditions related to race in this country, and our focus is on true racial healing and transformation.”

Stewart, who is a descendant of Isaac Hawkins, an enslaved man who was sold by Jesuits in 1838, told ABC News that the foundation has three main objectives.

“One is to support the educational aspiration of those descendants of people enslaved by the Jesuits, two is to pursue true racial healing and transformation throughout the United States through programmatic support and the support of organizations and individuals doing transformative work in that area,” Stewart said. “And three is to support the elderly and infirm descendants who are experiencing economic insecurity.”

Stewart said the foundation will not do reparations in the form of direct individual payments, but rather by investing in educational scholarships and offering grants to programs focused on the advancement of descendants of those enslaved by Jesuits.

The partnership is not intended to “address reparations in the old sense of the 40-acres-and-a-mule approach,” according to Stewart.

“This is about change, this is about moving a whole nation to a different place,” Stewart said. “This is between the largest known descendant group and one of the largest religious organizations in the world.”

“In this country, we hope this partnership can be the beginning of a major movement on the part of this whole nation to put slavery and its remnants behind us, once and for all, and to build a future based on love and respect for all,” Stewart said.

The new initiative comes after the police killing of George Floyd last May sparked a new racial reckoning in the country. Protests over systemic racism and police brutality against Black Americans erupted throughout the U.S. this past summer.

The legacy of slavery and racism in the U.S. is also still evident in a myriad of inequities faced by Black Americans. The net worth of the average white family is 10 times greater than the average Black family, according to a 2016 report from the Brookings Institute.

These imbalances have led to new calls for slavery reparations from the government and the private sector.

“You can see the remnants of slavery in everything about our existence,” Stewart said. “And the minute we begin to accept that truth instead of denying it, we can begin to cure the disease of racism in this country.”