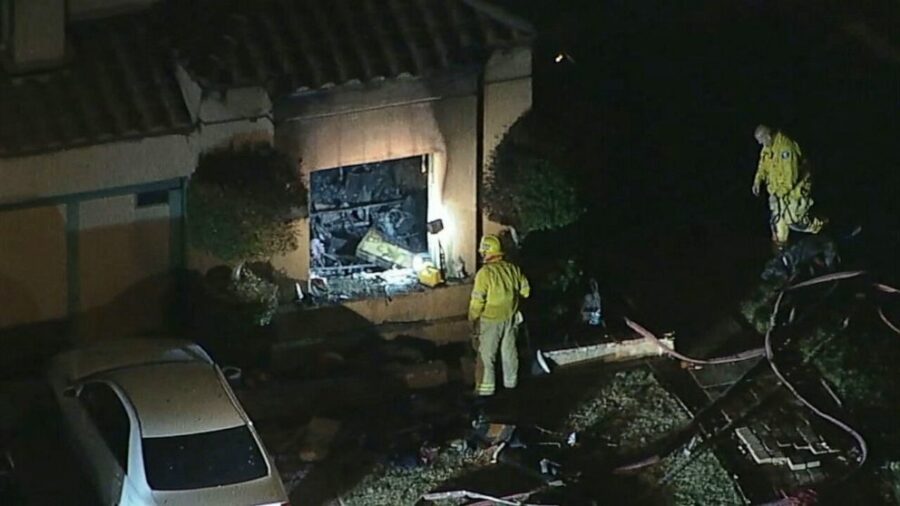 (RIVERSIDE, Calif.) — A grieving family is pleading with parents to monitor their children’s online activity after a former Virginia police officer “catfished” a 15-year-old girl online and then traveled to her Riverside, California, home, where he allegedly killed her mother and grandparents.

“Nobody could imagine this crime happening … especially it just being one day after Thanksgiving,” Mychelle Blandin, the sister and daughter of the three victims, said at a news conference Wednesday.

She recalled the family debate they had on Thanksgiving about her mom’s brownies.

“Little did I know … that would be the last time my husband and I would see my parents and my sister again,” she said. “The next day, when we were out buying Christmas lights for our home, I received a phone call from my parents neighbor of 22 years. They were best friends. They looked out for each other. She called to tell us that we needed to get there as soon as we could because my parents’ house was on fire.”

She pleaded, “Parents: Please, please know your child’s online activity. Ask questions about what they are doing and whom they are talking to. Anybody can say they’re someone else. And you could be in this situation.”

“Catfishing led to the deaths of the three most important people in my life: my dad, my mom and my sister,” she said through tears. “Tell our story to help your parenting. Not out of fear, but out of example of something that did happen.”

Riverside police said the suspect, 28-year-old Austin Lee Edwards, met the 15-year-old Riverside girl online through “catfishing,” where someone pretends to be a different person than they actually are. Police believe Edwards was pretending to be a 17-year-old.

Police said they believe Edwards drove from Virginia to California, parked in a neighbor’s driveway on Friday, went to the teen’s home and killed her mother and grandparents. Edwards then allegedly took the teen and drove away, according to police.

The girl has since been rescued and is not hurt, police said.

The murders were discovered on Friday after authorities received a report of a girl “who appeared distressed” while getting into a car with a man, police said. As officers responded to that report, they received calls of a fire at a nearby house.

Authorities believe the fire was intentionally set after the murders, police said.

The relatives were found with their hands bound behind their backs with duct tape, Riverside Police Chief Larry Gonzalez told ABC News.

The victims’ cause of death has not been released but police don’t believe they were shot.

“It could be either suffocation or maybe some smoke inhalation … but it’s really too early to tell until the coroner comes out with that,” the chief said.

Blandin said Sharie Winek was the “matriarch” of the family “with the biggest giving heart imaginable.”

Mark Winek, a high school softball and baseball coach, “was a man with a big and caring heart who unselfishly gave to his student athletes,” Blandin said.

Brooke Winek was a “loving single mom who did her best to raise her two teenage daughters in a loving way,” she said.

Several hours after the three bodies were found, authorities said they spotted Edwards driving with the teenager.

Edwards allegedly led deputies on a chase and fired shots, the San Bernardino County Sheriff’s Office said. Edwards then lost control of his car and drove off the road, pointing a gun at a sheriff’s helicopter, according to the sheriff’s office. Deputies then fired at Edwards and he was declared dead at the scene, the sheriff’s office said.

On Wednesday, the San Bernardino County Coroner said an autopsy determined that the cause of death was suicide by a self-inflicted gunshot wound, according to the sheriff’s office.

Police said they believe the teen was not involved in the murders.

Edwards was hired by the Virginia State Police in July 2021 and quit on Oct. 28, 2022, the agency said. He was hired by Virginia’s Washington County Sheriff’s Office on Nov. 16, 2022, and had started orientation, the department said.

The investigation is ongoing and includes learning “some of the intentions [Edwards] may have had,” the chief said at the press conference. It’s not clear what app or site Edwards and the teen used to communicate or for how long they were communicating, the chief said.

Blandin said the neighbor who noticed the unfamiliar car and called police is a “hero.”

As for Brooke Winek’s two daughters, “We hope that this community … can lift them up. They have the most difficult journey ahead,” Blandin said.

2023 ‘Doomsday Clock’ announcement: What to know and expect