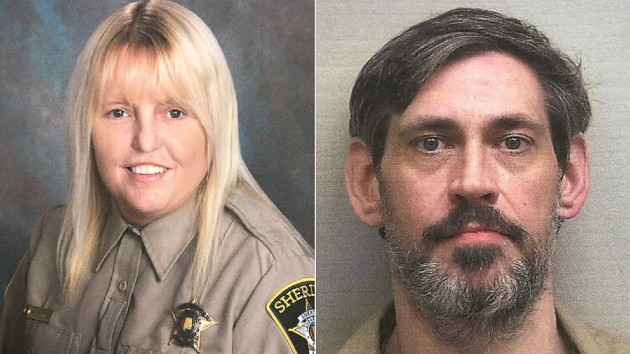 (NEW YORK) — Florence, Alabama, murder suspect Casey White has been interviewed extensively since he was apprehended in Indiana on Monday, ending an 11-day, multistate manhunt, and is cooperating with the investigation, Vanderburgh County Sheriff Dave Wedding told ABC News.

After escaped inmate Casey White, 38, and Lauderdale County Assistant Director of Corrections Vicky White, 56, were spotted at an Evansville, Indiana, hotel on Monday, they led police on a car chase in a Cadillac, Wedding said.

The crash ended in a wreck and Vicky White was hospitalized for injuries from an apparent self-inflicted gunshot wound, officials said. She died at a hospital Monday night.

“When we were taking Casey White into custody, upon his surrender he said, ‘Help my wife, she just shot herself,"” Commander Deputy U.S. Marshal Chad Hunt told ABC News’ Good Morning America on Tuesday.

An autopsy is set for Tuesday.

The manhunt began on April 29 when Casey White and Vicky White, who are not related, fled the Lauderdale County Jail. Authorities said they believe Vicky White willingly participated in the escape, which took place on her last day before retirement.

The duo left Alabama in a Ford Edge and ditched the car in Williamson County, Tennessee — about a two-hour drive north of Florence — just hours after the jail break.

“When we located the orange Ford Edge our investigators were able to determine that Casey and Vicky purchased another vehicle out of Tennessee,” Hunt said.

On Monday, U.S. Marshals said investigators were in Evansville following up on a tip after a 2006 Ford F-150 believed to have been used by Casey White and Vicky White was found abandoned at a car wash on May 3. Police were alerted to the vehicle on Sunday.

“We were able to verify the footage — that that was Casey White in the Ford F-150,” Hunt said.

“We obtained information, after we located the [Ford F-150] vehicle, that they had possibly gotten into a beige 2006 Cadillac. We dispatched our people into the area of the car wash and observed the vehicle at a hotel,” U.S. Marshal Marty Keely told GMA.

No one was injured as a result of the escape, Lauderdale County Sheriff Rick Singleton said.

Casey White had been in the Lauderdale County Jail awaiting trial for capital murder after allegedly stabbing a woman to death in 2015, according to the U.S. Marshals Service.

He will be brought back to Lauderdale County to be arraigned, Singleton said.

“They were located through just police work, good police work, with all the agencies involved,” Keely said. “We also had some information, tips, that came forward. We certainly want to thank the public.”

Vicky White had served for 17 years as a corrections officer in Lauderdale County. Singleton described her as “an exemplary employee” until the escape.

“Based on her experience in the corrections industry and law enforcement, this was definitely a well thought-out escape,” Hunt said. “And obviously her pre-planning and her involvement aided in their evasion.”