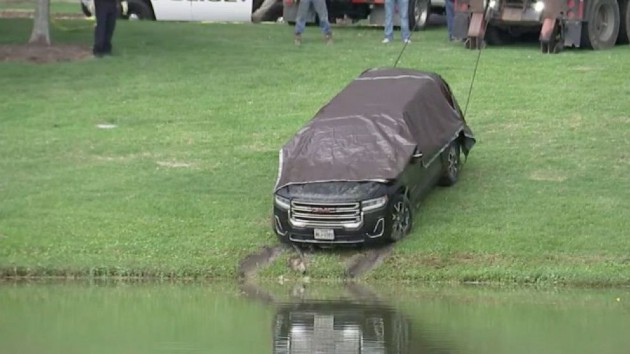 (HOUSTON) — A car matching the description of one belonging to a Texas mother who went missing three weeks ago was found in a pond with a body inside, authorities said Tuesday.

Erica Hernandez, 40, was last seen leaving a friend’s house in southwest Houston in the early morning hours of April 18.

In the weeks since, police and her family have been searching for the single mother of three.

Information gathered from the FBI led authorities to a retention pond in Pearland, southeast of Houston, where they searched the area and “found a location that was consistent with a vehicle striking the curb and entering a body of water at the end of the road,” Houston Police Department Commander Kevin Deese said during a press briefing Tuesday evening.

The police department’s dive team recovered a vehicle at the bottom of the pond that had the same body, make and license plate as Hernandez’s car, Deese said. It also had damage consistent with a car striking the curb, he said.

Hernandez was driving a black 2020 GMC Acadia with Texas plates the night she vanished, according to officials.

Over two hours after divers entered the water, a dark-colored SUV was recovered from the pond at about 7 p.m. local time, according to Houston ABC station KTRK-TV.

The search for Hernandez is not “definitively over,” though her family is awaiting positive identification of the person found inside the car, Deese said.

The Pearland Police Department is leading the investigation into the death of the person found in the car, authorities said. The body will be sent to the Galveston County Medical Examiner’s Office for further investigation.

It was evident the car had been in the pond for an “extended period of time,” Deese said.

Authorities could not share what information led them to that location, or where in the pond, which ranged from 8 to 15 feet deep, it was found.

Hernandez was captured by a Ring doorbell camera leaving her brother and sister-in-law’s home on the night of April 17, just hours before she disappeared. She then took her children home before going to a friend’s house, relatives said. She left her friend’s home about 2:30 a.m. on April 18. She texted her friend that she was “five minutes away from getting home,” sources told KTRK.

After Hernandez vanished, her cellphone and her vehicle’s OnStar connection stopped sending location signals, police said. Previously police said they had not ruled out foul play.

Since her disappearance, her family members have passed out missing person fliers and have searched for clues on possible routes she could have taken to get home.

Family members of Hernandez were on the scene of the investigation at the retention pond Tuesday, KTRK reported.