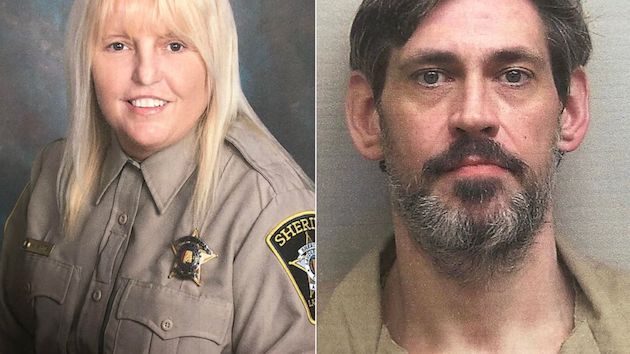 Authorities first spotted the car around 3 p.m. CT on April 29 — hours after the escape — and it wasn’t until Thursday night that the car was connected to the Whites, sheriff’s office spokeswoman Sharon Puckett told ABC News.

There’s no sign that murder suspect Casey White, 38, and Lauderdale County Assistant Director of Corrections Vicky White, 56, are still in the area of Williamson County, which is about a two-hour drive north of Florence, the sheriff’s office added.

The vehicle used by escaped Alabama inmate Casey White and former Correctional Officer Vicky White has been located in Williamson Co in Bethesda. There is NO sign the two are still in our area. The SUV was reported abandoned a week ago. It was identified last night @WCSO_Sheriff pic.twitter.com/LPa1IWE80x

Authorities with the U.S. Marshals Service searched the area Friday morning but found nothing to indicate that the pair was still in Williamson County, Puckett said.

“We don’t believe they’re anywhere near us,” she said.

However, authorities are still canvassing the area for any witnesses and are looking into whether any cars were reported stolen around the time the Whites’ car was ditched, Lauderdale County Sheriff Rick Singleton said at a news conference Friday.

Nothing was left behind in the car, the sheriff said.

Vicky White withdrew approximately $90,000 in cash from multiple banks before allegedly fleeing, Lauderdale County, Alabama, District Attorney Chris Connolly told ABC News. He said the banks were local to the Lauderdale County area, but he could not say when she withdrew the money.

On April 18 — just days before she allegedly fled with inmate Casey White — Vicky White closed on the sale of her home for just over $95,000. Singleton has said that investigators suspect Vicky White is “flush” with cash from the sale.

It’s now been one week since Casey White and Vicky White went missing. The two are not related.

The pair “may be armed with an AR-15 rifle, handguns and a shotgun,” the U.S. Marshals Service said.

There’s no indication anyone else was involved in the escape, the sheriff said.

Vicky White and Casey White disappeared after Vicky White allegedly told her colleagues that she was taking Casey White to the Lauderdale County Courthouse for a “mental health evaluation,” the sheriff said. He didn’t have a court appearance scheduled, Singleton said.

Vicky White also allegedly told her colleagues that she was going to seek medical attention after dropping the inmate off at court because she wasn’t feeling well, but Singleton said his office confirmed that no appointment was made.

Singleton said Friday that his message to Vicky White is: “Hopefully we find you safe.”

Singleton has described Vicky White, a 17-year veteran of the department, as “an exemplary employee” until now.

Vicky White has submitted her retirement papers and the day of the escape was her last day, the sheriff said.

At the time of his escape, Casey White was facing two counts of capital murder for the stabbing Connie Ridgeway in 2015, according to the U.S. Marshals Service.

Vicky White was described by authorities as 5 feet, 5 inches tall and approximately 145 pounds, with brown eyes and blond hair, though the U.S. Marshals Service said Thursday that she may have tinted her hair a darker shade. She was also described as reportedly having a “waddling gait.”

The USMS has put together two example images to identify the height differentiation between Casey White and Vicky White in relation to each other as well as the vehicle they are believed to be driving. pic.twitter.com/AAzKrfU934

A warrant was issued for Vicky White charging her with permitting or facilitating escape.

ABC News’ Whitney Lloyd and Will McDuffie contributed to this report.