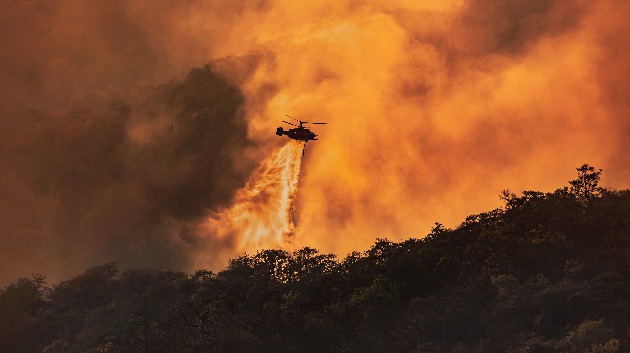 (LOS ANGELES) — A raging Southern California wildfire that authorities suspect was started by an arsonist remained out-of-control on Monday, fueled by drought-parched trees and brush that have not burned in about 60 years and forcing the evacuations of more than 1,000 people, authorities said.

The so-called Palisades Fire in the Santa Monica Mountains in Los Angeles County nearly doubled in size overnight to 1,325 acres and was 0% contained, according to fire officials.

About 300 firefighters are battling flames in rugged, steep terrain on the ground and from the air, but have struggle to get a handle on the blaze threatening 500 homes, many of them multimillion-dollar residences.

Air-tankers and helicopters are being used to drop water and fire retardant in remote areas inaccessible to firefighters on the ground, officials said.

A cause of the fire, which started on Friday evening near Topanga State Park, remains under investigation and is considered “suspicious,” according to the Los Angeles County Fire Department.

Los Angeles Fire Department arson investigators and Los Angeles police detained two people for questioning on Sunday. One of the individuals was released, while investigators continued to question a second person about the blaze, said Margaret Stewart, a spokesperson for the LAFD.

LAFD Battalion Chief Al Ward told reporters during a news conference on Sunday that firefighters are focusing on the northeast flank of the fire, trying to prevent it from jumping a road and spreading into the more densely populated area of Topanga Canyon.

About 500 homes in the Topanga Canyon area are under mandatory evacuation.

No injuries have been reported and no homes or structures have been destroyed by the blaze, officials said.

Ward said that on Saturday afternoon the fire was contained to about 100 acres, but south-southwest gusts of 15-25 mph caused the fire to flare up and quickly spread. He said fire grew from 100 acres to 750 acres in about an hour on Saturday and has been growing ever since.

The fire was first reported about 10 p.m. Friday behind a residential area and near a trail leading to Topanga State Park, officials said.

The Los Angeles Police Department said a police helicopter crew spotted what appeared to be a person setting fires in the area on Friday night.

The Los Angeles County Sheriff’s Department Air Rescue 5 said on Twitter late Saturday night that a team was inserted into the “Topanga area in search of arson suspect setting fires.”

The fire comes amid a early and potentially dangerous fire season in California. The California Department of Forestry and Fire Protection, also known as Cal Fire, said last week that California has already seen nearly 14,000 acres burn in more than 2,000 wildfires since the start of 2021, an increase of 700% over fire activity in 2020.

California is coming off a record year for wildfires in 2020, in which nearly 10,000 fires burned more than 4 million acres, destroyed more than 8,200 structures and killed 33 people, according to Cal Fire.