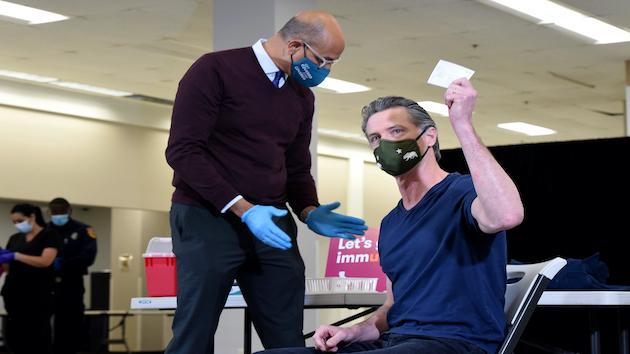 (NEW YORK) — California Gov. Gavin Newsom patiently waited for the day that all Californians 50 and older became eligible for a COVID-19 vaccination, and on Thursday he received a dose of Johnson & Johnson vaccine.

Newsom told ABC News’ Zohreen Shah- in an exclusive interview that he was thrilled to be “one and done,” as he recalled the first vaccine administered in Southern California, to nurse Helen Cordova, on Dec. 14.

“Eighteen million doses later, it’s finally my turn,” he said. “Today we’re making it eligible for everyone 50 and over. In two weeks, everybody 16 and over. We have that supply now.”

Newsom received his vaccine in hard-hit south Los Angeles to emphasize vaccine equity in a community that’s suffered immensely throughout the coronavirus pandemic.

According to data from the Centers for Disease Control and Prevention, California has reported more coronavirus cases — more than 3.57 million — and virus-related deaths — 58,269 — than any other state.

In Los Angeles County, residents identifying as Hispanic of Latino have accounted for approximately 53% of COVID-19-related deaths despite accounting for 48.6% of the population.

“This is why all our work has to be focused, mindful of the issue of equity, not just as a platform, not just as a promotion, not just as a promise,” Newsom said. “It’s tough. It’s gritty work. It’s hard. It’s stubborn. We know that as it relates to the issue of testing. Seven, eight months ago, that was our biggest issue — equity on testing and access to testing opportunities. Now it’s the same with vaccines.”

Last month, the CDC issued a report that measured county’s vaccine rollouts with regards to “social vulnerability.” The vulnerability index included several factors, including race, education, poverty level and housing, which the agency noted has also been linked to higher coronavirus rates.

The report examined roughly 49 million shots distributed between Dec. 14 and March 1. Of the 48 states surveyed, California ranked 44th when it came to vaccinations among residents in the most socially vulnerable counties.

To date, California has delivered nearly 19.5 million doses of COVID-19 vaccine, more than any other state. However, it ranks 30th for vaccines administered per 100,000 people.

Newsom also added that getting children back to school will be of critical importance in returning to “normal,” especially children in minority communities that have been among the hardest hit during the pandemic.

“We have a unique moral responsibility to address systemically, once and for all, not just as a state, but I expect as a nation,” he added.

As California takes step to ease restrictions, coronavirus cases, hospitalizations and deaths across the state have all declined significantly after peaking earlier this year. Since mid-January, the state’s seven-day average of cases has declined by over 94%.

But other states have seen surges recently — two dozen have seen cases increase by at least 10% over the last week while 18 also have seen 10% increases in reported hospital admissions.

And cases are increasing elsewhere. In France, for instance, said Newsom, schools and businesses are closing once more because of the virus’s mutations and community spread.

“We have to be mindful this disease is not going away. It’s not disappeared. It’s as virulent. It’s as deadly as it’s ever been,” Newsom said.

Newsom also addressed the mounting controversy over his handling of the pandemic, which has resulted in an attempted recall election.

“I don’t think it advantages the state of California,” he said. “Forget the Democratic Party. Forget the current occupant that happens to be the current governor. And so, for me, this is really an assault on California — California values — and I hope we can stay united.”