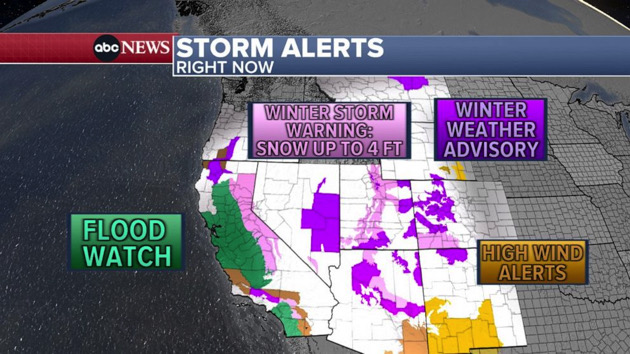 (NEW YORK) — Monday marks the last day of heavy rain for California in the wake of a series of relentless storms that have ravaged the state with flooding.

Parts of Southern California and the Bay Area were hit with more than 6 inches of rain this weekend.

About 175 residents were rescued from rising flood waters in San Joaquin County, near San Francisco, on Sunday, according to the California Governor’s Office of Emergency Services.

In Orange County in Southern California, a survivor clinging to a tree was rescued.

Flood watches remain in effect for more than eight million in California on Monday.

Heavy rain will continue for the Bay Area Monday morning and then a band of rain will push south toward Monterey in the afternoon.

Meanwhile, heavy snow is ongoing in the Sierra Nevada mountains. More than 3 feet of snow has been recorded so far and an additional 3 feet is expected over the next 24 hours.

On Monday night, the skies will dry out over much of California. Dry days, and potentially dry weeks, are ahead.

California has been walloped by a near-constant onslaught of rain and snow for weeks.

“I know how fatigued you all are,” he said during a press briefing. “I hope you just maintain a little more vigilance over the course of the next weekend and we’ll get through this.”