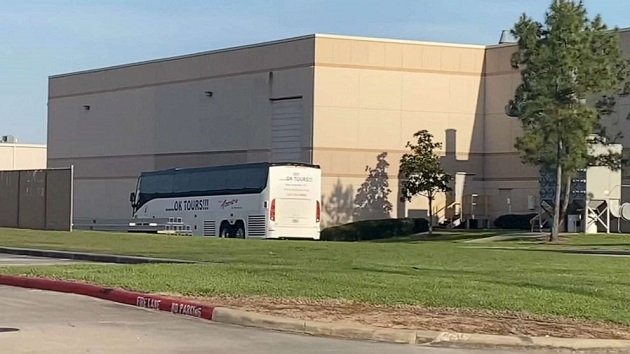 (HOUSTON) — The first bus carrying unaccompanied migrant girls arrived at a Houston shelter Friday evening, amid a surge of children entering the country and growing concern for their well-being.

The shelter, run by the National Association of Christian Churches, has a capacity for 500 beds.

Rep. Sylvia Garcia toured the facility on Friday and tweeted Houston “has always been a welcoming region,” promising to monitor the shelter and “do whatever it takes to ensure that children are protected, treated with dignity and respect.”

Garcia said the facility will have beds, medical facilities and equipment to properly house and process the children, per local ABC station KTRK-TV.

The Biden administration has differed from former President Donald Trump’s in that it stopped using a public health policy called “Title 42” to turn away unaccompanied minors at the border. Instead, unaccompanied minors are being taken to their own facilities, tested for COVID-19, and connected to family or sponsors in the country.

The arrival of the girls in Houston comes amid rising concerns for the well-being of young children crossing into the U.S.

The influx of migrants and Biden’s policy to allow unaccompanied minors to stay has led to overcrowding at border facilities as well as concern over COVID-19 infections among the newcomers due to cramped conditions.

On Friday Texas Department of Health and Human Services told ABC News that from March 1 to March 30, there has been a total of 647 COVID-19 cases in 40 out of 50 Texas HHSC Office of Refugee Resettlement operations. These are self-reported positive COVID-19 cases in migrant children in care.

As of an April 2 the Department of Homeland Security and Department of Health and Human Services report there are a total of 19,236 children in Customs and Border Patrol custody and HHS care, officials told ABC News.

There are nine migrant housing facilities located in Texas, according to KTRK. They are located in Carrizo Springs, Dallas, Houston, Midland, Pecos and San Antonio and Fort Bliss, which is the largest and holds 5,000 beds.

The United States has been grappling with a surge in migrants arriving at its southern border in recent months.