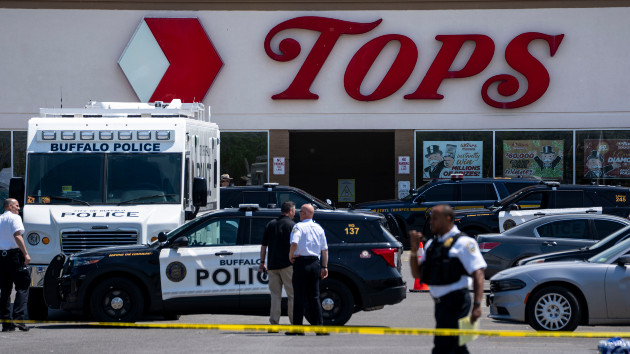 (BUFFALO, N.Y.) — As loved ones of the victims looked on, an 18-year-old suspect accused of fatally shooting 10 people in what authorities described as a racially motivated rampage, appeared in court Thursday and was called a “coward” by someone at the hearing.

The suspect, Payton Gendron, entered the Buffalo, New York, City Court wearing an orange jumpsuit, a white face mask and chains on his legs and hands and surrounded by numerous court officers.

Prosecutors said a grand jury had indicted him on first-degree murder, but all the charges remain under seal.

Judge Craig D. Hannah adjourned Thursday’s one-minute hearing. The hearing was scheduled to be a felony hearing, but because Gendron has been indicted, the judge scheduled his next hearing for June 9, when he is expected to be arraigned on charges in the grand jury indictment.

Relatives and family members of victims killed in the shooting at a grocery store Saturday crowded into the courtroom to watch. Gendron entered and left under heavy guard.

A woman in sitting in the courtroom gallery was overheard yelling, “Payton, you’re a coward” as he exited the courtroom.

“The defendant continues to remain held without bail. There will be no further comment from our office until there is a report following an investigation by the Grand Jury,” Erie County District Attorney John Flynn said in a statement. “As are all persons accused of a crime, the defendant is presumed innocent until proven guilty in a court of law.”

No additional charges have been filed.

Gendron made no comments in court.

Gendron was initially charged with one count of murder following Saturday afternoon’s massacre at a Tops Friendly Market in which police officials alleged he intentionally targeted Black people in the attack he planned for months. He pleaded not guilty and was ordered to be held without bail.

Gendron is expected to face additional murder and attempted murder counts and state hate crime charges. The FBI is also conducting a parallel investigation, which the Department of Justice said could lead to federal hate crime and terrorism charges.

During a visit to Buffalo on Tuesday, President Joe Biden called the mass shooting an act of “domestic terrorism.”

All 10 of the people killed in the attack were Black, six women and four men. Three other people were wounded in the shooting, including one Black victim and two white victims.

Investigators said Gendron drove three hours from his home in Conklin, New York, and alleged he spent Friday conducting a final reconnaissance on the store before committing the mass shooting Saturday afternoon.

Authorities allege Gendron was wielding an AR-15-style rifle, dressed in military fatigues, body armor and wearing a tactical helmet with a camera attached when he stormed the store around 2:30 p.m., shooting four people outside the business and nine others inside. Buffalo Police Commissioner Joseph Gramaglia said the suspect fired a barrage of 50 shots during the rampage.

Police said Gendron allegedly livestreamed the attack on the gaming website Twitch before the company took down the live feed two minutes into the shooting.

Buffalo police officers arrived at the store one minute after getting the first calls of an active shooter and confronted the suspect, who responded by placing the barrel of the rifle to his chin and threatening to kill himself, according to Gramaglia. He said the officers de-escalated the situation and talked Gendron into surrendering.