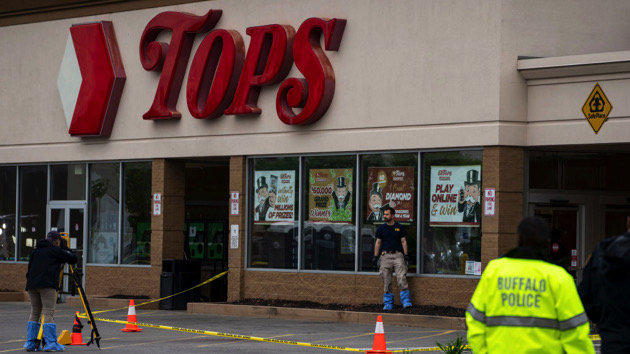 (BUFFALO, N.Y.) — The white teenager suspected of fatally shooting 10 people at a Buffalo, New York, grocery store in what authorities say was a racially motivated attack allegedly also took part in animal abuse, according to a document authorities say he posted online that was obtained by ABC News.

Among those alleged online writings he shared on the social media platform Discord, 18-year-old Payton Gendron allegedly detailed taking part in animal abuse in which he killed a cat, according to the document.

Within the writings reviewed by ABC News, Gendron alleged that his mother gave him a box to bury the cat he said he killed.

On a conference call Tuesday with state and local partners, law enforcement officials said that Gendron began posting threads to Discord regarding body armor in the summer of 2021, according to a source familiar with the phone call. In April of 2022, the threads also appeared to show that he spoke about wanting to taunt federal law enforcement, officials on the call said.

Investigators probing Gendron’s background have been combing through hundreds of pages he allegedly posted online, in part to determine if others were aware of his alleged plans to commit a mass shooting targeting Black people.

A spokesperson for Discord released a statement saying, “We extend our deepest sympathies to the victims and their families. Hate and violence have no place on Discord. We are doing everything we can to assist law enforcement in the investigation.”

Law enforcement officials are investigating the document’s origins and authenticity as they try to determine who may have had access to it.

Gendron is accused of carrying out the massacre on Saturday afternoon at a Tops Friendly Market in Buffalo. All ten of the victims killed were Black.

The suspect, who surrendered to police inside the store, was initially arraigned on Saturday evening on one count of murder. He is scheduled to return to court on Thursday for a felony hearing.

The Erie County District Attorney’s Office is expected to announce more charges against Gendron, including additional counts of murder. The Department of Justice is also working on a parallel investigation that could lead to federal hate crimes against Gendron.

Gendron is being held without bail and is on suicide watch.

According to the online document, Gendron had allegedly been planning the shooting for months. On March 8, he drove to Buffalo and visited the Tops supermarket, where he was questioned by a security guard at the store as he was apparently compiling detailed plans of the location.

Buffalo Police Commissioner Joseph Gramaglia said the suspect was spotted at the store on Friday apparently doing reconnaissance and was told to leave by the store manager when it appeared he was bothering customers.

President Joe Biden and first lady Jill Biden visited Buffalo on Tuesday and met with relatives of those killed. In a speech, Biden called the mass shooting “domestic terrorism.”