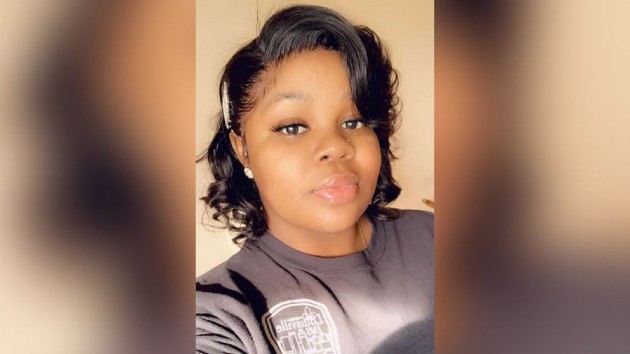 (NEW YORK) — One year after Breonna Taylor was shot dead by police in her Louisville, Kentucky, home, no officers have been charged in connection to her death, and her mother is desperate to see justice.

“These officers … they committed a crime and they should be held accountable for it,” Taylor’s mother, Tamika Palmer, said in an interview with ABC News’ Good Morning America 3: What You Need to Know.

“There’s been no justice,” Palmer said, adding that her family is “still in an uproar.”

“I still don’t have any comfort,” she added. “And it’s definitely not easier. It’s a year for everybody else, but every day is still March the 13th to me.”

Shortly after midnight on March 13, 2020, Taylor, a 26-year-old Black medical worker, was asleep at home with her boyfriend, Kenneth Walker.

Officers arrived and executed a “no-knock” search warrant as part of an investigation into a suspected drug operation, allegedly linked to Taylor’s ex-boyfriend.

Walker, who claims he thought the officers were intruders, fired one gunshot, striking an officer in the leg. In response, police opened fire, and Taylor was shot multiple times. No drugs were found in Taylor’s apartment.

Sgt. Jonathan Mattingly, who was shot, contends that he and the other officers knocked on Taylor’s door multiple times and repeatedly yelled, “Police, search warrant!” before they rammed the door open. But Walker and 11 other witnesses at Taylor’s apartment complex claimed they didn’t hear police announce themselves before storming in.

Walker initially was charged with attempted murder of a police officer, but those charges were dropped. This month, a judge signed an order permanently closing the criminal case against Walker.

One officer involved in the shooting, Brett Hankison, has been fired, and the others were placed on administrative duty.

But at first no charges were brought against any of them, which sparked protests throughout the U.S.

Kentucky state Attorney General Daniel Cameron said the officers were justified in their use of deadly force because Walker fired the first shot.

In September, Cameron convened a grand jury to investigate possible charges against the officers. A grand jury indicted Hankison on three counts of first-degree wanton endangerment of Taylor’s neighbors, for firing into the apartment directly behind Taylor’s, where three people were inside. Hankison pleaded not guilty.

Cameron told Louisville station WDRB-TV in September that his office didn’t give the grand jury the option to consider murder charges.

As the months have ticked by, Palmer’s lawyer, Lonita Baker, told GMA 3 that it’s “very possible that a prosecutor could indict, and I still encourage our local prosecutors to get involved.”

“We want a grand jury to hear charges against the officers for the murder of Brianna Taylor,” Baker said.

‘Hopefully to not have another Breonna’

In January, two other officers involved, Myles Cosgrove and Detective Joshua Jaynes, were fired from the police department. Cosgrove fired the shot that killed Taylor per a ballistics analysis. Jaynes wasn’t at the shooting but prepared the search warrant.

Mattingly, who also fired into Taylor’s home and was shot in the leg during the raid, has not been fired.

A federal investigation into possible civil rights violations is ongoing.

“It is our hope that at the conclusion of the federal investigation that [the officers] are indicted for those charges, and they are prosecuted to the full extent of the law,” Baker said.

Meanwhile, some policing changes have been made in the wake of Taylor’s death.

Louisville’s new police chief, former Atlanta Police Chief Erika Shields, started in January, and when she was announced as the new chief she said she was ready to take on the city’s healing and the rebuilding of community trust.

“We have to also remember the progress we’ve made for Black women in America, that’s the legacy of Breonna Taylor,” lawyer Ben Crump, who represents Taylor’s family, told ABC News in a statement. “We have to remember that Black women matters too.”

In June 2020, the Louisville Metro Council unanimously passed Breonna’s Law, outlawing “no-knock” warrants and requiring body cameras be turned on before and after every search. The officers involved in Taylor’s shooting were not wearing body cameras.

And last month, a bill limiting the use of no-knock warrants passed the Kentucky Senate unanimously.

Palmer told GMA 3 that she’s yet to see cases in which these changes have been enacted, but added that she’s “grateful to have it there — hopefully to not have another Breonna.”