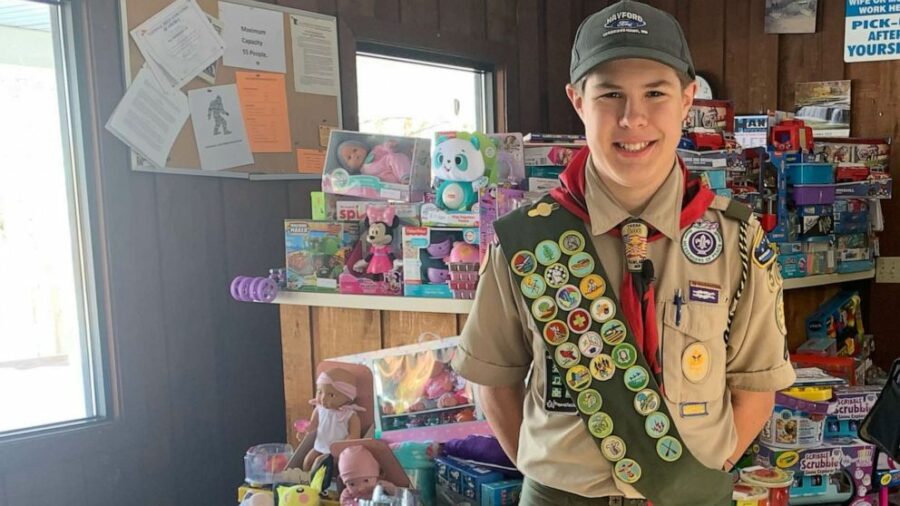 (NEW YORK) — For the second year in a row, a 12-year-old Boy Scout has turned into secret Santa, buying Christmas presents for over a hundred children in foster care and shelters who might not otherwise get to enjoy the holiday season.

Jonathan Werner said he was inspired to carry out his philanthropy project after hearing about his father’s own childhood experience in foster care.

“Based upon stories that I have from him, it didn’t really sound like they had much of a Christmas,” he told “Good Morning America.”

“I was in foster care from the time that I was five to [when] I got adopted at about 12, so like seven years of my childhood and I don’t remember my Christmases ever really being very special until after I was adopted,” Jonathan’s dad, Steven Kolk, told “GMA.” “So having him do a project like this and knowing that where I was those years, I could have had somebody like [Jonathan], it would have been really special.”

This year, 138 children across four Minnesota counties – Kanabec, Isanti, Pine and Chisago counties – as well as some children in part of Anoka County will receive basic necessities and personal care items some requested and gift cards and toys Jonathan selected for them. He chose the items on multiple shopping trips based on lists that local social workers he partnered with would share with him to help guide the process.

“For example, if the kid had asked for a Lego set of some sort, we would go off of age and gender and then we would buy a Lego set for them and based upon other interests, we would also try to find a Lego set that also intertwines with those interests as well,” Jonathan said.

The seventh-grader said he bought about 600 presents overall, totaling approximately $11,300.

To fund the gifts, he sold popcorn to local community members and this year, he made more than he was expecting.

MORE: Boy Scouts jump into action after Amtrak derailment: ‘We’re really proud’
But throughout the journey, Jonathan said he’s simply happy to give back.

“I’ve definitely learned a lot throughout this. I’ve learned money management. I’ve learned other things of that nature as well. It also makes me really happy to know that kids that wouldn’t really get a Christmas are getting a Christmas because of my project,” Jonathan said.

His parents say they couldn’t be more impressed.

“I’m proud of what he chose to do and the number of people that he can reach with this project,” Steven Kolk told “GMA.”

“It’s really special. I have seen it move not even myself, it has inspired me personally. But I’ve also seen it inspire our other children and friends of ours and other people in the community at the stores and things like that and so it’s really special. It really brings a tear to your eye and makes you feel like he’s really making a difference for people,” Serena Kolk added.