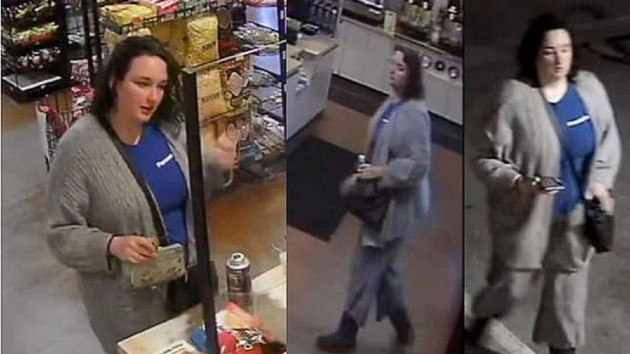 (NEW YORK) — The body of a Nevada teenager who was allegedly kidnapped from a Walmart parking lot over two weeks ago has been found, authorities said.

Naomi Irion, 18, was last seen inside her car outside a Walmart in Fernley, Nevada, outside Reno, on March 12, according to the Lyon County Sheriff’s Office. Surveillance video captured a man getting into the driver’s seat of her car and leaving in an unknown direction with Irion in the passenger seat.

A tip regarding her disappearance led investigators to a remote part of neighboring Churchill County on Tuesday, where they found a “possible gravesite” and recovered the body of a woman from the scene, authorities said. On Wednesday, the remains were identified as Irion’s by the Washoe County Medical Examiners Office.

No further information is being released at this time due to the ongoing investigation, authorities said.

Irion was waiting for a shuttle bus on March 12 around 5 a.m. to take her to her job at Panasonic Energy of North America in the Reno area. Her brother reported her missing the following day when she did not come home from work.

A suspect in the alleged kidnapping was arrested last week. Troy Driver, 41, of Fallon, Nevada, has been charged with first-degree kidnapping and is being held on $750,000 bail following his first court appearance Wednesday, according to Reno ABC affiliate KOLO-TV.

The FBI was offering a reward of up to $10,000 for information leading to Irion’s location. The Lyon County Sheriff’s Office also released multiple photos and a video of the man authorities say entered Irion’s car in hopes of identifying him.

Driver’s next hearing is scheduled for April 5, KOLO reported.