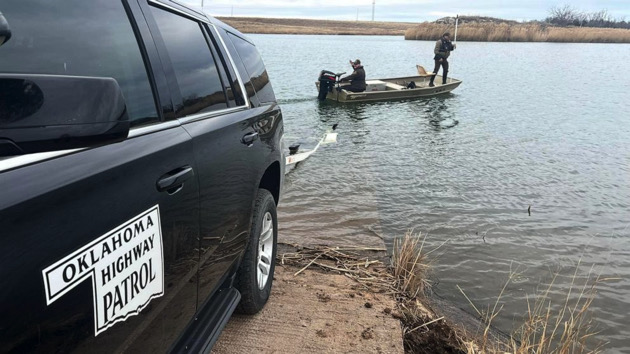 (CYRIL, Okla.) — The body of a child has been found amid the search for a 4-year-old girl who was reported missing after a postal carrier found her sister wandering alone outside one week ago, authorities in Oklahoma said Tuesday.

The remains were found in rural Grady County, outside of Rush Springs, and will be transported to the Medical Examiner’s Office in Oklahoma City for positive identification, according to the Oklahoma State Bureau of Investigation.

“This is [an] active homicide investigation and until the remains are positively identified, the OSBI will not be commenting further,” the agency said in a statement.

Local authorities began searching for Athena Brownfield on Jan. 10, when the postal worker discovered her 5-year-old sister and notified police, according to the Oklahoma State Bureau of Investigation. The search became a “recovery operation,” the agency said on Monday, several days after one of her caregivers was arrested on a murder charge in connection with the child’s disappearance.

The two sisters had reportedly been in the couple’s care for at least a year, before the 5-year-old was found alone outside their home in Cyril, according to the Oklahoma State Bureau of Investigation. Alysia Adams is related to the sisters, the agency said. Authorities did not comment on how the Adams’ became the primary caregivers of the children.

The girls’ biological parents have been interviewed by agents and are “cooperating with the investigation,” the Oklahoma State Bureau of Investigation said.

Ivon Adams is awaiting extradition to Oklahoma. During a Friday court appearance in Maricopa County, he waived his right to an extradition hearing.

“I need to get there and fight this,” he told the court.

The Oklahoma Highway Patrol issued a missing and endangered person alert for Athena on Wednesday to people in a 15-mile radius of Cyril, located about 70 miles southwest of Oklahoma City.

The Oklahoma State Bureau of Investigation said Monday that the search was now considered a “recovery operation” and that its agents and the Oklahoma Highway Patrol were searching areas of Caddo County for the child’s remains.

Law enforcement last week conducted searches of bodies of water in and around Cyril and volunteers helped conduct a grid search, looking in vacant houses and local waterways, police said.

Authorities have been working to put together an exact timeline of when Athena was last seen, according to Brook Arbeitman, a spokesperson for the Oklahoma State Bureau of Investigation.

Arbeitman said last week that authorities were finding items in town that “could be relevant” and helpful to the case, though did not elaborate.

“We are finding things that we hope might give us clues,” she said.

Trash service in the town had been suspended amid the search “in an effort to search for additional clues as to Athena’s whereabouts,” Arbeitman told reporters Thursday.

Athena’s sister did not require any medical care and currently is in protective custody with the state, Arbeitman said.