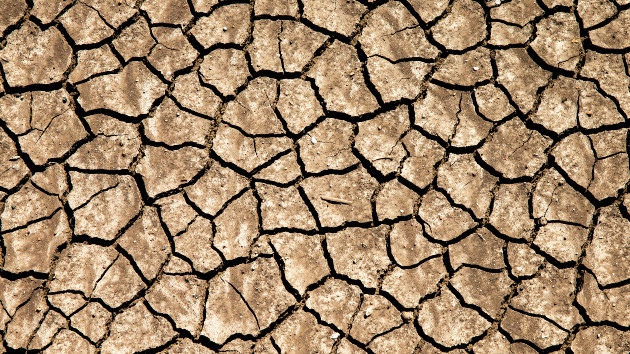 (NEW YORK) — Bodies of water all over North America are drying up as a result of drought and a decrease in precipitation, experts told ABC News.

Earlier this year, the National Oceanic and Atmospheric Administration predicted that the 22-year megadrought affecting the West would not only intensify but also move eastward.

That prediction appears to be coming into fruition, with about 82% of the continental U.S. currently showing conditions between abnormally dry and exceptional drought, according to the U.S. Drought Monitor.

And while the U.S. and North America continue to witness water levels dropping in crucial rivers, lakes and reservoirs, a mixture of climate change and poor water management policies are causing similar events all over the world, experts told ABC News.

“Rivers all over the world are running really low,” especially the Tigress and Euphrates Rivers in Iraq, as well as significant bodies of water in countries like Italy, Romania, France and China, said Jonathan Deason, professor of the Environmental and Energy Management Program at George Washington University.

The experts said that a two-pronged approach that includes climate change mitigation and better water management policies will be crucial as bodies of water continue to dry up. But so much damage has already been done, that even drastic improvements or reductions in emissions will not immediately impact reducing the stress on water levels, they said.

Here are some recent examples of bodies of water drying up in North America:

Decreasing water levels along the Mississippi River, one of the most important trade routes in the country, have been causing ripple effects worldwide.

Earlier this month, barges with shipping containers began idling along the sandbars of the river that previously contained ample water.

Waters along the Mississippi have receded so much that a ferry that likely sunk in the late 1800s or early 1900s was discovered near Baton Rouge, earlier this month, and possible human remains were located by a resident in Coahoma County, Missouri, on Saturday.

Much of the region surrounding the Mississippi River is experiencing conditions between abnormally dry and severe drought, according to the U.S. Drought Monitor.

The Mississippi River at Memphis, Tennessee, hit its lowest level in recorded history on Monday, with several other gauges at risk to break records as well.

Supply chain delays for goods like grains, cement and fuel, which travel through New Orleans to the Gulf of Mexico, could be a consequence of a dried-up Mississippi, experts say.

“What happens is, commercial vessels have trouble, have obstacles popping up,” Deason said. “Waters used to be so deep, it didn’t make a difference for navigation.”

Ripple effects will include inflation and the prices of food and goods increasing, Deason added.

The water levels will likely get worse, and recede even more, before they begin to rise again, Jonathan Remo, an associate professor at Southern Illinois University’s School of Earth Systems and Sustainability, told ABC News last week.

The Great Salt Lake, the largest saltwater lake in the world and largest terminal lake in the Western Hemisphere — is continuing to lose its volume at alarming rates.

By 2017, the lake had lost half of its water since the first settler arrived in 1847, according to a study published in Nature Geoscience. It is now one-third of its original capacity and has reached unsustainable levels, researchers told PBS.

The loss of water in the lake, which is now at its lowest levels ever, is already causing a dangerous ecological ripple effect throughout Utah, and it will likely get worse, scientists told ABC News in July. More than 800 square miles of river have been exposed as a result of the dry-up.

“I don’t know how much time we have,” Joel Ferry, the director of Utah’s Department of Natural Resources, told ABC News.

While most of the decline is attributed to development in the region, resulting in large population increases, climate change and drought are to blame as well, according to researchers.

Animals and plants near the lake are already bearing the burden of the dry-up, Kyle Stone, a wildlife biologist for the state of Utah, told ABC News. The salinity in the water is increasing as water levels drop, killing algae, a source for brine shrimp, which serves as food for more than 10 million birds that stop at the lake during their migration patterns, Stone said.

In addition, if the lake were to dry out, dust storms would be a great concern due to the decades of heavy metals and toxic substances that remain trapped in the sediment, scientists said.

Tens of thousands of dead salmon wash up in Canada

Researchers in British Columbia happened upon a disturbing sight when monitoring salmon populations in the Neekus River in the Heiltsuk territory amid the spawning season earlier this month.

Once the scientists got there, they discovered about 65,000 dead pink salmon on the banks of the dried-up creek instead. The smell was so bad that it was burning the researchers’ noses and eyes, forcing them to cover their faces, Allison Dennert, an ecologist at the Simon Fraser University in Burnaby, British Columbia, told the BBC.

“It was the worst mass mortality of salmon, pre-spawn salmon, that I’ve ever seen,” Dennert said.

Little rain has fallen in the region, which has been experiencing high temperatures in recent months– a continuation of an atmospheric ridge that has been plaguing the Pacific Northwest with record-breaking temperatures.

The large school of fish may have been fooled by a single rain shower that coincided with high tide, making their way upstream in an attempt to spawn for the season, the researchers said.

The tens of thousands of fish eventually sucked up all of the oxygen in the low water levels of the creek. Once they were rendered immobile and began to die off, the ammonia left in the water exacerbated the mass death event.

More than 70% of the salmon had not had the opportunity to spawn before water levels in the creek dropped, Dennert tweeted on Oct. 4.

“I would say it’s pretty safe to say this is a consequence of climate change,” Dennert said.

Lack of snow melt to replenish the Platt River

Stunning images out of Nebraska shed light into the harsh reality of the consequences of diminishing amounts of snow pack.

The Platte River in central Nebraska, which is fed by snow melt from the Rocky Mountains in Wyoming and Colorado that feed into Lake McConaughy, has not had a chance to replenish as less and less snow falls over the winter.

Photos of a portion of Interstate 90 near Kearney, Nebraska, show a completely dehydrated river bed under a bridge that was previously filled with river water.

More than a third of the Pratte River is in extreme or worse conditions, with precipitation outlooks for the fall forecast to be dry, the Drought Center tweeted on Monday.

Irrigation has depleted most of the reservoirs in the northeast and southwest Nebraska, which are both in extreme drought, KLKN-TV, the ABC affiliate in Lincoln, Nebraska, reported.

Widespread areas around the state have been “quite dry and quite warm” since early July, causing water demand and usage for crops to increase dramatically, Brian Fuchs, climatologist for the National Drought Mitigation Center, told KLKN.

While it is not unusual for the river to go dry during the irrigation season, experts are monitoring the river downstream of Columbus as an indicator of the overall health of the river, Jason Farnsworth, executive director of the Platte River Recovery Implementation Program, told KLKN.

“If down below the Loup River, you have no flow, that’s sort of a really big deal,” Farnsworth said.

Supplies of drinking water continue to dwindle in the West

As the megadrought in the West persists, the reservoirs providing water to households and the vast agriculture industry are getting dangerously low.

Water supplies along the Colorado River and the two largest reservoirs in the country that it supplies — Lake Mead and Lake Powell — are continuing to recede.

Further west, reservoirs in California as drying up as well, Pablo Ortiz, climate and waters scientist at the Union of Concerned Scientists, told ABC News.

Lake Oroville and Lake Shasta, the two biggest reservoirs in the state, are barely above 30% capacity, and every major reservoir in California except for one is below the historical average, according to the California Department of Water Resources.

“This impacts hundreds of communities that depend on groundwater as their primary source of drinking water,” as well as the agriculture industry, he said.