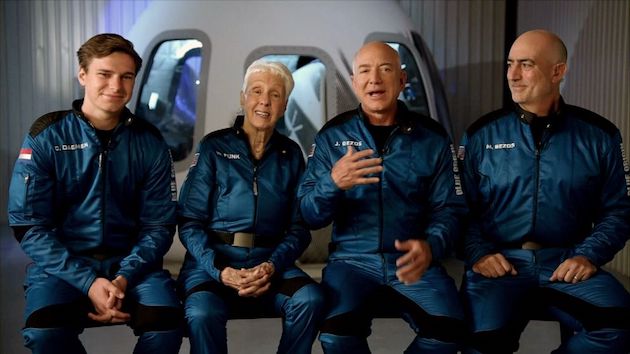 (NEW YORK) — Amazon founder Jeff Bezos blasted to the edge of space and spent a few minutes outside Earth’s atmosphere Tuesday on the first crewed flight from his firm Blue Origin.

An elated Bezos could be heard calling it “the best day ever” after landing back on Earth.

The milestone launch in the modern commercial space race comes on the 52nd anniversary of Neil Armstrong and Buzz Aldrin’s moon landing in 1969, though the space-faring landscape has evolved by giant leaps since then as billionaires emerge as key players driving the new race to the cosmos.

Bezos, who holds the title of the richest man in the world per Bloomberg data, has said the spaceflight will fulfill a lifelong dream and he is also curious how it will “change” him.

After the capsule landed back on Earth, Jeff Bezos was seen through the window pumping his fists and giving a thumbs-up.

The Bezos brothers, Wally Funk and Oliver Daemon then exited the capsule with huge smiles on their faces and were greeted with cheers and hugs.

Capsule lands back on earth

After an approximately 10-minute journey, the capsule floated back down to the earth via a parachute and touched down at approximately 9:23 a.m ET.

Booster lands back on earth

The booster has returned to earth, landing successfully while the capsule carrying the crew has crossed the Karman line — the boundary between earth’s atmosphere and space.

“You have a very happy crew up here, I want you to know,” one of the astronauts can be heard saying.

Mission Control has confirmed the capsule has separated from the booster and the astronauts are now experiencing a few minutes of weightlessness.

Audio from the capsule captures the joyful moments the crew discovered they were in microgravity.

New Shepard soars in first flight with humans aboard

The New Shepard spacecraft lifted off at around 9:12 a.m. ET, carrying the Bezos brothers, Funk and Daemen to the edge of space.

The spacetrip will be 11 minutes total.

New Shepard is a ‘go’ for launch

The go poll is now complete, and New Shepard is officially a “go” for launch.

Launch has been delayed by a few minutes

With the astronauts in the capsule and the hatch closed, there was a temporary pause in launch activities for approximately five minutes while Blue Origin staff did final checks. Launch activities have since resumed, and liftoff is just 11 minutes away.

The hatch has been closed

The hatch for the New Shepard capsule has officially been closed, and the final checks are now underway ahead of the launch.

The Bezos brothers were seen waving and smiling through the windows of the capsule.

Crew is buckling in their seats

The crew are now getting in their seats on the capsule and buckling-in ahead of the closing of the hatch. A communications check with each astronaut has also commenced.

The astronauts, led by 82-year-old Funk, were seen climbing the tower and preparing to ingress the New Shepard capsule.

The crew arrived atop at the so-called astronaut safety shelter, with approximately 30 minutes to go before launch.

Crew is en route to the launchpad

The four soon-to-be astronauts were spotted emerging from the astronaut training center around 8:15 a.m. ET and entering vehicles that will take them to the launchpad.

The Bezos brothers, Wally Funk and Oliver Daemon were greeted with cheers from Blue Origin staff as they cruised past mission control on the way to the launchpad. The launch remains on schedule for a 9 a.m. liftoff.

The Amazon founder will be accompanied on the historic journey by his brother, Mark Bezos, as well as the oldest and youngest people ever to go to space, Wally Funk, 82-years-old, and Oliver Daemon, 18.

Funk is a trailblazing female pilot who trained to be an astronaut with the so-called “Mercury 13” program during the original U.S.-Soviet space race era but was then told they were only sending men to space at the time. Funk still blazed trails for women in aerospace, becoming the first female Federal Aviation Administration inspector.

Daemon is a Dutch student set to begin classes at Utrecht University this fall, and is the first paying customer for Blue Origin after the initial auction winner backed out. Daemon graduated high school in 2020, and has said he hopes his trip inspires other young people. Blue Origin said the anonymous bidder who paid $28 million won’t make it on Tuesday due to “scheduling conflicts.” The company has not disclosed how much Daemon paid for his seat.

Blue Origin’s New Shepard rocket and capsule is now on the launchpad at the company’s “Launch Site One” facility in a remote area in the West Texas desert, about 25 miles north of the small town of Van Horn.

The reusable suborbital rocket system, which launches and lands vertically, was rolled out early Tuesday morning, before its scheduled take-off at 9 a.m. ET.

Bezos jokes he’s not having his ‘last meal’

Bezos joked with reporters that he did not have his “last meal” before taking off on his space travel company’s first flight with people on board.

As the Amazon and Blue Origin founder served food to members of the press gathered at the remote rocket launch site in the West Texas desert, one reporter jokingly asked: “Is this your last meal?”

“Hey, did somebody say ‘last meal?"” Bezos, wearing a cowboy hat and sunglasses, responded to laughter. “I don’t think we should put it that way. Let’s talk about it in a different way.”

Chicken thighs, mac ‘n’ cheese and black-eyed peas were on the menu — a “favorite” recipe by Bezos’ grandmother. He also handed out copies of the recipe.

“Now, if you don’t like this, just keep it to yourself,” Bezos said to more laughter.

Bezos told reporters that he and his three crewmates had finished their training.

“We’re going to have a little refresher early tomorrow morning,” he added. “We have an early wake up tomorrow.”

What is happening and how to watch

Liftoff of the inaugural Blue Origin flight is scheduled for 9 a.m. ET from a rural complex just north of Van Horn, Texas. In total, the flight will be 11 minutes, with approximately three minutes spent above the so-called Karman line that is defined by some as the boundary between Earth’s atmosphere and outer space. After re-entry, the astronauts are set to descend back to Earth in their capsule with a parachute-landing in the west Texas desert.

ABC News will carry live coverage of the event, which will also be streamed on Blue Origin’s website. The live broadcast will begin at 7:30 a.m. ET. Unlike most spaceflights, there are no on-site public viewing areas in the vicinity of the launch site. The newly-minted astronauts are set to have a press conference shortly after landing back on earth.

There is no pilot aboard the fully-autonomous capsule. While Blue Origin’s New Shepard has flown 15 test flights, Tuesday’s will be the first with humans on board.

The definition of “space” has emerged as a heated debate point in the new space race, as Sir Richard Branson took heat for not passing the Karman line (roughly 62 miles above earth) during his Virgin Galactic spaceflight earlier this month. Neither Blue Origin nor Virgin Galactic’s flights will reach Earth’s orbit, however, the way Elon Musk’s SpaceX missions have. Musk, also a billionaire player in the new space race, on Twitter has called out this “big difference.”

While the modern space race has become the arena of the ultra-wealthy at a time when a global pandemic on earth has exacerbated inequities, some argue the rise of private sector involvement has saved NASA money and accelerated technological advances — which in the long-term has the potential to open up space tourism to all who have been curious about the cosmos.

Still, the billionaire daredevils using themselves as guinea pigs for their private space tourism firms have not had the same support astronauts garnered during the original U.S.-Soviet space race. Animosity was exacerbated by reports that Bezos and Musk have avoided income taxes. A Change.org petition calling for Bezos to stay in space has garnered headlines and more than 160,000 signatures.

In an interview with ABC News’ “Good Morning America” just one day ahead of the spaceflight, Bezos said he is curious how briefly leaving Earth will “change” him.

“I don’t know what it’s going to mean for me,” Bezos said. “I don’t know, I’m very curious about what tomorrow is actually going to bring. Everybody who’s been to space says it changes them in some way. And I’m just really excited to figure out how it’s going to change me.”