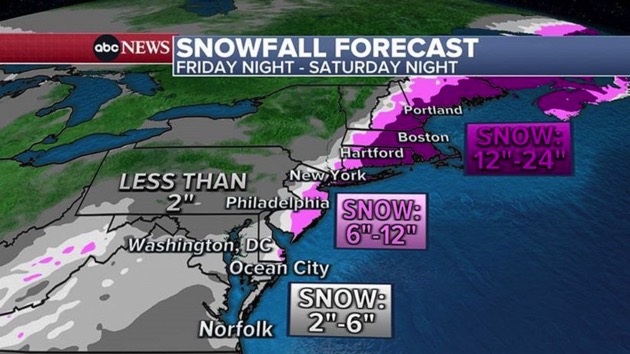 (NEW YORK) — Millions of Americans are bracing for a snow storm that’s expected to hammer the East Coast with blizzard conditions this weekend.

The storm, set to begin Friday night, will stretch from the Carolinas to Maine.

Blizzard warnings are in effect from coastal Virginia up to Maine, including Atlantic City, Long Island, Connecticut, Boston and Portland. This marks the first blizzard warning for Boston and the Jersey Shore in four years.

The snowfall is forecast to start on the East Coast late Friday night and continue into Saturday evening in New England, before the storm exits the area, according to ABC News meteorologists.

Snowfall totals are estimated to be higher than previously expected due to a number of factors. The storm is expected to move closer to shore, bringing heavy bands of snow inland, with a snowfall rate of 2 to 3 inches per hour. The light and fluffy nature of this snow will help it stack up higher than the wet, heavy snow that typically comes with coastal storms.

The frigid air in the forecast will allow the snow to accumulate quickly and create very slick conditions on roads.

Virginia Gov. Glenn Youngkin has declared a state of emergency. He warned residents to be mindful of heavy snow and high winds as well as the possibility of tidal flooding and power outages.

Meanwhile, the wind chill on Saturday morning could make the temperature feel like it’s in the single digits for the Interstate 95 corridor and in the teens for the Carolinas, according to ABC News meteorologists.