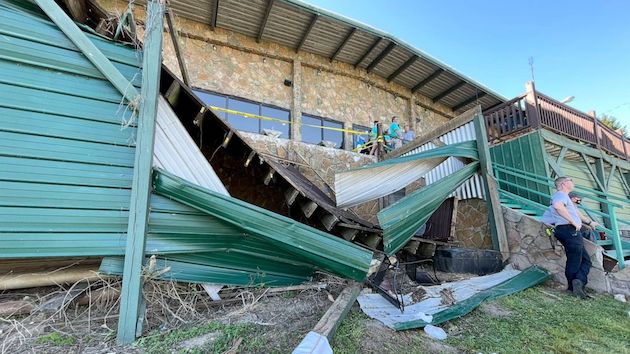 The joyous festivities turned to a moment of terror on Saturday afternoon in suburban Chattanooga when an outdoor wooden deck at Zois Harbor Lights Restaurant suddenly gave way under the weight of more than 40 people posing for a birthday group photo, according to the Hamilton County Emergency Management Agency.

The episode unfolded around 4 p.m. at the restaurant in Soddy-Daisy overlooking Chickamauga Lake, officials said.

One of those injured, Sondra Teligades, told ABC affiliate station WTVC-TV in Chattanooga that she heard cracking noises and described panic of free-falling for roughly two stories to the ground at the edge of the lake. Teligades said she was taken to a hospital and treated for a concussion and rib contusions.

Firefighters from Dallas Bay and Soddy-Daisy responded to the scene and began performing first aid on those injured.

Officials said 11 people were taken by ambulance to nearby hospitals. Two patients were critically injured, according to Amy Maxwell, spokesperson for the county Emergency Management Agency.

Maxwell told WTVC that it was not immediately clear why the deck collapsed.