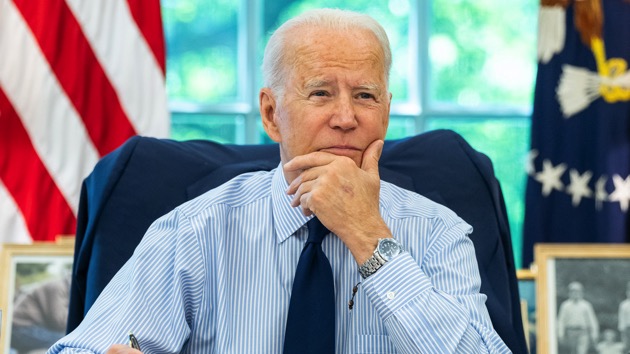 (WASHINGTON) — President Joe Biden is set to speak to the nation Thursday afternoon to lay out what the White House said is a new six-part strategy to combat the delta variant, but it was unclear whether he would call for more vaccination mandates in the private sector and for the nation’s schools.

“He’s going to outline the next phase in the fight against the virus and what that looks like, including measures to work with the public and private sector,” White House press secretary Jen Psaki told reporters at her daily briefing Wednesday.

She said he would be “building on the steps that we’ve already announced, the steps we’ve taken over the last few months, requiring more vaccinations, boosting important testing measures and more, making it safer for kids to go to school, all at a time when the American people are listening. Again, this will be six steps that we’ll work to be implementing over the months ahead.”

According to a White House official, the president’s plan will include six areas of focus: vaccinating the unvaccinated; furthering protection for the vaccinated; keeping schools safely open; increasing testing and requiring masking; protecting the economy’s recovery; and improving care for those with COVID-19.

Psaki confirmed there will be new components as part of the president’s announcement but wouldn’t go much beyond general comments about testing access, mandates and making sure kids are protected from the highly transmissible virus as they return to school and Americans return from summer vacations.

Psaki said plans were still being finalized as Biden met with with his COVID-19 response team Wednesday afternoon.

“Will any of those new steps influence the average American’s day-to-day life? Should we expect any new mitigation recommendations, as an example?” a reporter asked.

“It depends on if you’re vaccinated or not,” Psaki replied, but gave no further details.

She highlighted efforts the administration already has taken to try and get the delta variant under control.

“We’ve been at war with the delta variant over the course of the last couple of months. And just to remind you of some of the steps that we have announced, we have announced new government mandates on DOD, our military forces, NIH, other — the VA, the Veterans Affairs — Department of Veterans Affairs, folks who are serving on the front lines on the health — on health — in health roles in that department. We’ve also incentivized additional mandates, whether it is in home — in health care facilities, nursing homes, and others,” Psaki said.

“And we’ve also lifted up and — and incentivized private sector — private sector mandates, because we’ve seen that they have been effective. We’ve also deployed over 700 surge response teams across the country and work closely, again, with the private sector to institute more requirements on vaccinations,” she continued.

“We have more work to do, and we are still at war with the virus and with the delta variant,” she added. “So, we’re going to build on that work. And he’s speaking to it now, because this issue, of course, is on front of mind, top of mind to Americans across the country. People are returning to schools. Workplaces are either reopening, some brick and mortar, or some people are just returning to work after spending some time with family or loved ones over the summer.”

But besides ordering the nation’s 2.1 million federal employees and 1.3 million active duty service members get vaccinated, Biden has limited legal authority to institute a broad vaccine mandate for most Americans.

On Tuesday, Psaki did seem to suggest that Biden will call on the private sector to institute more vaccine mandates. Major corporations such as Facebook, Google and Citigroup have already announced vaccination requirements.

“I will note that we’ve seen that there are a range of ways that we have increased vaccinations across the country, or vaccinations have increased, I should say. One of them is private sector companies mandating in different capacities that their employees get vaccinated. Or certain school districts mandate,” Psaki said.

Biden previewed some of what he planned to say when he spoke about the August jobs numbers, which were much lower than predicted.

“There’s no question the delta variant is why today’s jobs report isn’t stronger. I know people were looking, and I was hoping, for a higher number. But next week, I’ll lay out the next steps that are going to — we’re going to need to combat the delta variant, to address some of those fears and concerns,” Biden said Friday.

A recent ABC News/Washington Post poll showed Americans in August souring on Biden’s handling of the pandemic, with his approval rating for his handling or the response dropping 10 points from June, down to 52%

Biden’s remarks are scheduled for just 11 days before the administration is set to begin widely rolling out booster shots of Pfizer on Sept. 20, a process mired by confusion as some public health experts say the data doesn’t yet support the need for boosters.