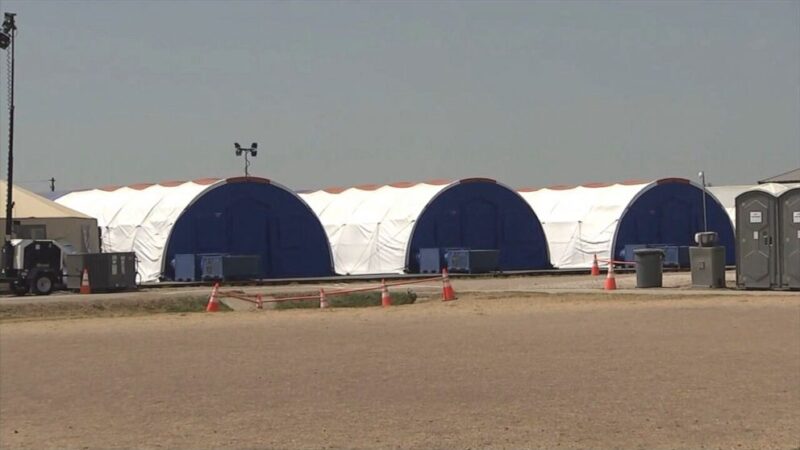 (CARRIZO SPRINGS, Texas) — The Biden administration on Wednesday — for the first time — let journalists into a Texas border facility housing young migrants who crossed the southern border, after weeks of denying access to members of the news media. But it has continued to keep reporters out of other, detention-like facilities filled well over their capacities.

A reporter and camera crew were permitted on Wednesday to enter a facility in Carrizo Springs, Texas, run by the U.S. Department of Health and Human Services’ Office of Refugee Resettlement.

They accompanied a delegation of White House officials and members of Congress touring the facility for minors who have arrived at the border unaccompanied by parents. They saw intake and dining areas, as well as a medical clinic, but they were not allowed to speak to any of the minors.

The administration granted the press access a day before President Joe Biden is scheduled to hold the first formal, solo news conference of his presidency, where he is likely to face questions about why the administration was keeping the news media out.

It also came the same day Biden said he was tapping Vice President Kamala Harris to lead his administration’s efforts to stem the flow of migration from Central America and just as the president — for the first time — brought reporters into a White House meeting on immigration.

The influx of unaccompanied minors on the border has posed a potent political threat to the president, who has come under fire from Republicans for his handling of the situation.

Used during the Trump administration but shuttered in July 2019, the Carrizo Springs facility was reopened last month to accommodate the increasing number of unaccompanied children crossing the border. Reporters had been allowed in under former President Donald Trump, although recording devices were not allowed inside.

There are currently 766 boys ranging in age from 13 to 17 years old in the facility, which has never reached its capacity of 952, officials told the reporter, who represented several U.S. television networks, including ABC News. While the journalists were not allowed to speak with the children, whom they saw walking around the grounds and playing soccer and basketball, the members of Congress touring the facility were.

Officials said the facility is not at capacity since they have to set aside space for teens who test positive for COVID-19 when they arrive at the facility and that 108 have tested positive, according to the reporter.

The group was also taken to an empty classroom, recorded video of piles of clothing for new arrivals and saw employees walking around outside buildings on the ground.

The administration has continued to block access to other facilities along the border that actually have far surpassed their capacities. The White House has cited concerns over privacy and the coronavirus pandemic.

The Carrizo Springs HHS facility, and others like it, represent the second step for many unaccompanied minors picked up by U.S. authorities on the southern border.

First, they are typically taken to detention-like facilities run by U.S. Customs and Border Protection, where they are, by law, only supposed to remain for up to 72 hours before being transferred to HHS shelters or sent to live with sponsors. Those facilities do not have the same capacity for dealing with children that the HHS ones do.

In recent weeks, the CBP facilities have become overwhelmed with thousands of minors waiting to be transferred — a record — as HHS has struggled to provide enough space. HHS has recently said it was opening special intake facilities at convention centers in Dallas and San Diego to help take more minors out of CBP custody.

The department plans to open a second facility in Carrizo Springs and is bringing another similar facility online in Pecos, Texas, to house a total of 2,500 migrant kids.

As of this week, there were approximately 10,500 minors in HHS custody, with nearly 5,000 in CBP custody.

The first glimpses inside a crowded CBP facility came Monday from Democratic Rep. Henry Cuellar, who released photographs showing migrants packed into a CBP overflow facility in Donna, Texas. The next day, CBP released its own video showing the inside of the Donna facility and another one in El Paso, Texas.

Under Trump, CBP officials did allow members of the media to visit a port of entry processing center and border patrol station, but due to privacy concerns, cameras were not allowed to film the interior areas.

When then-Vice President Mike Pence took the press with him to two migrant detention centers in July 2019 — with the Trump administration under fire for crowded, unsanitary conditions there — the visit generated dramatic images of Pence standing before hundreds of migrants crammed into cages.

“We’re also open to providing access there,” White House press secretary Jen Psaki said Wednesday when pressed on why the administration was still keeping members of the news media out of the other facilities. “And this is just the first step in the process of providing greater access to the media.”

Republicans have criticized the Biden team for, they say, being unprepared for migrants coming to the United States in response to Biden rolling back former President Donald Trump’s restrictive immigration policies.

The White House, meanwhile, has pointed fingers at Trump — saying his administration exacerbated the situation by systematically ripping families apart, treating people fleeing violence and poverty with inhumanity and neglecting or dismantling the system set up to deal with them.

Trump’s administration turned away minors and separated children from their parents as a matter of policy — and hundreds still remain apart as a consequence. Biden, on the other hand, has made clear he does not want to turn away the children and teenagers arriving at the border alone.