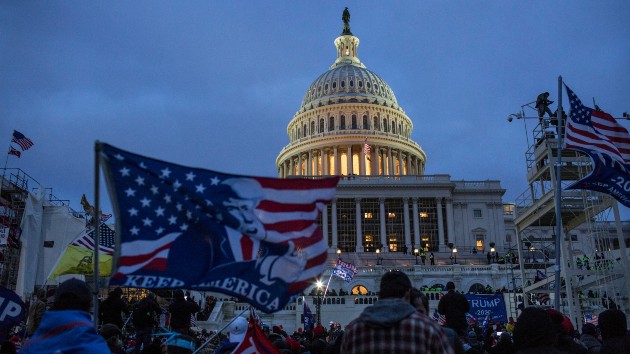 (WASHINGTON) — With former President Donald Trump’s second impeachment trial starting Tuesday, Senate Democrats are focused on trying to tie a direct line between Trump’s rhetoric and the deadly attack on the U.S. Capitol by his supporters.

An ABC News investigation into the nearly 200 accused rioters facing federal charges for their alleged involvement at the Capitol — based on court filings, military records, interviews, and available news reports– found that at least 15 individuals who stormed the building have since said that they acted based on Trump’s encouragement, including some of those accused of the most violent and serious crimes.

“I believed I was following the instructions of former President Trump,” said Garret Miller in a statement released through his lawyer. “I also left Washington and started back to Texas immediately after President Trump asked us to go home.”

Miller, who admitted to entering the Capitol in his statement, also threatened to “assassinate” Democratic Rep. Alexandria Ocasio Cortez that same day, which he apologized for.

“While I never intended to harm Congresswoman Ocasio-Cortez nor harm any members of the Capitol police force, I recognize that my social media posts were completely inappropriate,” said Miller, who is facing five charges, including making threats, violent entry and disorderly conduct on Capitol grounds. “They were made at a time when Donald Trump had me believing that an American election was stolen. I want to publicly apologize to Congresswoman Ocasio-Cortez and the Capitol police officers.”

Robert Bauer told FBI Agents in an interview that he “marched to the U.S. Capitol because President Trump said to do so,” according to court records. Bauer pleaded not guilty to the charges against him, according to local reports. His lawyer did not respond to ABC News’ request for comment.

At least one rioter said he is willing to testify during the impeachment trial about how Trump’s words resonated with him, according to his lawyer.

“He heard the words of the president. He believed them. He genuinely believed him,” Jacob Chansley’s lawyer, Al Watkins, told ABC News in an interview. “He thought the president was walking with him.”

During his speech at the “Stop the Steal” rally on the National Mall before the riot, Trump had urged his supporters to “walk down to the Capitol” alongside him to protest the certification of the election.

“You’ll never take back our country with weakness,” Trump declared. “You have to show strength, and you have to be strong.”

Chansley pleaded not guilty to the charges against him, which include violent entry in a Capitol building and obstruction of an official proceeding.

In their 80-page impeachment brief, Democrats describe the Jan. 6 speech, in which Trump urged supporters to “fight like hell,” as “a militaristic demand that they must fight to stop what was occurring in the Capitol at that very moment.”

Trump’s lawyers have defended his comments at the rally as ones that “fall squarely within the protections of the First Amendment.”

“Mr. Trump, having been elected nationally, was elected to be the voice for his national constituency,” his lawyers wrote in a brief last week.

Among the rioters who now say they took Trump’s words to heart are those accused of perpetrating some of the most violent crimes that day. They include an alleged member of the Proud Boys — which the FBI has characterized as a “nationalist organization whose members sometimes engage in acts of violence” — who was charged with conspiracy to “obstruct, influence, impede, and interfere with law enforcement officers engaged in their official duties.” Also among them is Emanuel Jackson, who allegedly attacked a police officer with a baseball bat.

“The nature and circumstances of this offense must be viewed through the lens of an event inspired by the President of the United States,” said Jackson’s lawyer of his client’s alleged attack on an officer. He did not respond to ABC News’ request for comment.

Robert Sanford, a Pennsylvania man who is accused of throwing a fire extinguisher at an officer, told investigators he had “followed the President’s instructions and gone to the Capitol,” according to court records. He pleaded not guilty to the charges against him, according to local reports.

The lawyer for Riley June Williams, who prosecutors allege stole Speaker of the House Nancy Pelosi’s laptop, said in an interview with CNN that her client had taken Trump’s “bait.”

Through social media posts and testimony included in affidavits and other court filings, FBI agents have highlighted how dozens of others facing charges saw Trump’s pleas for his supporters to convene in Washington ahead of the Electoral College vote count as a clarion call that they should be prepared for violence.

On Sunday, a journalist posted a video of what appears to be a rioter reading out the president’s tweets through a megaphone at the Capitol. “Mike Pence didn’t have the courage to do what should have been done to protect our country and our constitution,” a man yells out to a crowed, reading Trump’s tweet from earlier in the day off his phone.

Investigators in recent weeks have signaled they’re focused on determining to what extent certain participants coordinated the assault on the Capitol, with prosecutors securing multiple grand jury indictments for conspiracy against members of the Proud Boys as well as members of the far-right Oath Keepers militia.

Last week, federal prosecutors in separate court filings detailed several instances in which six members of the Proud Boys allegedly worked in tandem among scores of rioters overtaking the Capitol.

A self-described “Sergeant at Arms” of the Proud Boys’ Seattle chapter, Ethan Nordean, was arrested last week, with prosecutors pointing to social media posts that they said indicated an “intent to organize a group that intended to engage in conflict” at the Capitol.

“For example, around Dec. 27, 2020, Nordean posted a message asking for donations of ‘protective gear’ and ‘communications equipment,"” the Justice Department said, adding that on Jan. 4 Nordean posted a video on social media which he captioned, “Let them remember the day they decided to make war with us.”

In an FBI affidavit, investigators also highlight a moment captured on video outside the Capitol in which Nordean is seen having a “brief exchange” with a man allegedly connected to the extremist Three Percenters militia group, Robert Gieswein. Moments later, say investigators, Gieswein was allegedly part of one of the first groups of rioters to breach the Capitol building through a broken window.

Prior to formally charging him, the FBI had identified Nordean in an affidavit filed in connection with charges brought last month against one of the leaders of the Proud Boys, Joseph Biggs, in which prosecutors noted that both men were seen in videos leading a large crowd of other Proud Boys members toward the Capitol leading up to the riot.

A separate indictment against Proud Boys members Dominic Pezzola and William Pepe accused the two men of conspiring together to obstruct law enforcement seeking to protect the Capitol. Investigators say both men were part of a group that assaulted law enforcement and removed metal barricades on the Capitol grounds, with Pezzola ripping away a police officer’s riot shield that he later allegedly used to break through a window in the front of the Capitol.

Neither Pepe or Biggs have entered pleas or have attorneys listed in their cases yet.

The most significant conspiracy charges leveled by the Justice Department to date, however, have been in their indictments against Thomas Caldwell, Donovan Crowl and Jessica Watkins, who investigators say are affiliated with the anti-government Oath Keepers.

Prosecutors allege that the three mounted an “operation” leading up to Jan. 6 in order to interfere with the counting of the Electoral College vote, which involved “recruiting as large a following as possible” to travel to D.C. and forcibly storm the Capitol.

“Evidence uncovered in the course of the investigation demonstrates that not only did CALDWELL, CROWL, WATKINS, and others conspire to forcibly storm the U.S. Capitol on January 6, 2021 — they communicated with one another in advance of the incursion and planned their attack,” the indictment said.

In an interview with The New Yorker, Crowl admitted to being inside the Capitol, saying he was there to “do security” for “VIPs.” Watkins, in a separate interview with a local Ohio outlet, said the riot was “the most beautiful thing I ever saw until we started hearing glass smash.”

Prosecutors say messages they obtained showed that prior to their arrival in Washington, Caldwell sent a text recommending that the group stay at a nearby hotel that “would allow us to hunt at night.”

Even more alarming were alleged exchanges flagged by prosecutors that took place during the attack itself.

Investigators say they obtained an audio recording of Watkins and other unidentified Oath Keepers speaking on a Zello channel called “Stop The Steal J6,” where Watkins is heard saying, “We have a good group. We have about 30-40 of us. We are sticking together and sticking to the plan.”

Separately, Caldwell received a series of Facebook messages during the attack, including one in which an unidentified individual said, “All members are in the tunnels under capital seal them in. Turn on gas.”

After Caldwell posted a message saying “Inside,” he received several other messages, including one saying, “Tom all legislators are down in the Tunnels 3floors down,” and directions such as, “Go through back house chamber doors facing N left down hallway down steps,” according to Department of Justice affidavits.

The indictments against both the Oath Keepers and Proud Boys members make repeated references to “persons known and unknown,” suggesting that prosecutors are likely to bring more charges as they advance their investigations in the coming weeks and months — with department officials saying that much more serious charges of “seditious conspiracy” are likely to be leveled against certain rioters “very soon.”